New recruit Christopher is on the notorious one-day trial, but will he make his first sale by 6pm and secure the job, or will he be yet another victim of the vicious "retail battlefield"? 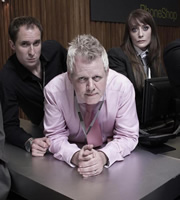 On High Street UK the priority is to 'shift units, make money, smash targets...' and no one knows that better than the staff of PhoneShop. New recruit Christopher is on the infamous one day trial, but will he make his first sale by 6pm and secure the job?

In this pilot episode, Christopher, the 'new man', is charged with replacing super salesman 'Little' Gary Patel (who has been arrested - again - for attacking the lads from Top Shop). Christopher, a graduate, needs to quickly adapt to this new world where street smart is the order of the day and degrees count for nothing. Will he survive the dreaded one-day trial? And if he does will he fit in with the rest of the team?