After hearing a rumour that Dylan is father to the child of a former girlfriend, Cabbage is determined to find out the truth, despite Dylan's protestations. 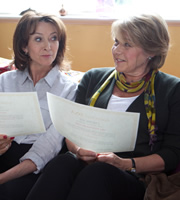 When Cabbage and Pat attend a hen party, they are shocked but excited to discover that Dylan might be a dad.

Eager to prove she is a grandmother, Cabbage turns up at Dylan's ex-girlfriend's house with Pat, but will they get the answer they are looking for?

Cabbage's words of wisdom prompt Nicola to think about her relationship with Toby, but this only results in an embarrassing situation in front of Dylan.

This episode was originally scheduled and listed as Episode 4.

The toddler character Jack did appear in this episode, but neither of the twins sharing his role were credited.