Pat & Cabbage is a comedy about the ever-changing generation shifts in today's modern world.

Finding themselves single for the first time in decades, Pat and Cabbage have finally acquired financial, familial and moral freedom and they're exploiting it to the max. Pat and her best friend Cabbage have no intention of growing old gracefully - although their children really wish they would.

Pat's eldest daughter Helen is married to Jim, and together they have a three year old son, Jack. In an attempt to kick-start a new career, Helen is now retraining to be a therapist, which she likes to think gives her a unique perspective on the personal lives of those around her. Her family would disagree.

Helen's husband, Jim is a dreamer but sees himself as a creative entrepreneur - whether it be manufacturing mozzarella in his kitchen or making wine racks from old sewage pipes, Jim is always trying new ventures with varying degrees of success. His boundless optimism makes him a constant source of fun. And sometimes chaos.

Pat's youngest daughter, Nicola is bumping along in an on/off (mostly off) relationship with PE teacher Toby. Pat's concerned about the risk of Nicola "leaving it too late" but this strikes Nicola as hypocritical. Isn't the fact that Nicola's got a job and financial independence exactly what Pat and "her lot" spent most of the sixties fighting for? Nicola's happiest when affectionately taking the mick out of Dylan, with whom she unexpectedly finds some common ground.

Dylan is Cabbage's only son and her pride and joy. Now in his forties, he's the most successful underachiever of all his friends. But it's ok - his mother enables his Peter Pan lifestyle by continuing to let him live with her, rent-free.

Pat & Cabbage explores the generational shifts in a 21st century world wholly different to what's come before - and what it means these days to be the age we are, where sixty year olds run marathons and forty year olds wonder if they're too young to settle down.

Above all it's about friendship, family and the sometimes catastrophic ripple effect of finding a new lease of life. 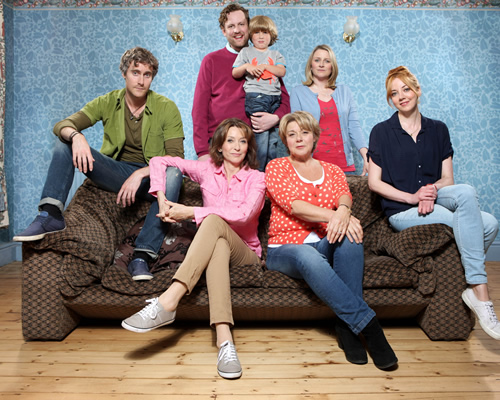