Where did the idea for Outsiders come from?

Last year I was approached by the production company who had an idea for a Scouts-based show. I thought there was good comedy potential for comics living together in a forest and trying to win badges but my feeling was the connection to the Scouts was a bit random. So what I said was, 'this needs to be about the survival of humans in the wild, specifically in light of the pandemic, and how that's made everyone think about the stuff of life.'

We've had a lot of time sitting in our homes during the pandemic, thinking about what it means to be human. Early on in the lockdown, particularly, we had all these worries about what life would be like if we ran out of loo roll or if there were power cuts and I think everyone was frightened by how distant we've become from a real means of survival.

Nobody was more frightened than comedians who were unable to gig. They were suddenly unable to do this basic thing that they can all do which is to stand in front of a crowd and get paid if they make them laugh. Suddenly, it was illegal to do that! Lots of professions had a period of thinking, "What am I doing with my life?" but I think comedians more than any other profession had a real existential threat.

Thinking about whether we've become too reliant on complex civilisation is a constant; going back to ancient times, all humans have contemplated a return to the wild and wondered whether ceasing to be hunter-gatherers and becoming agriculturists was a mistake. So I thought, rather than this programme just being a sort of jokey thing about the Scouts, let's make it something that gets to the root of our existential crisis.

My theory, now and always, is that it's a lot easier to be funny about things that matter on a deep level, or that are very frightening. If something has a bit of significance, the jokes come more easily. Have I Got News For You in a week when the news is dense and interesting is easier to do than a week where there's not much news going on. So by the same token, making a show about our own fear of what we've become seemed a better idea than just being a bit silly for the sake of it. 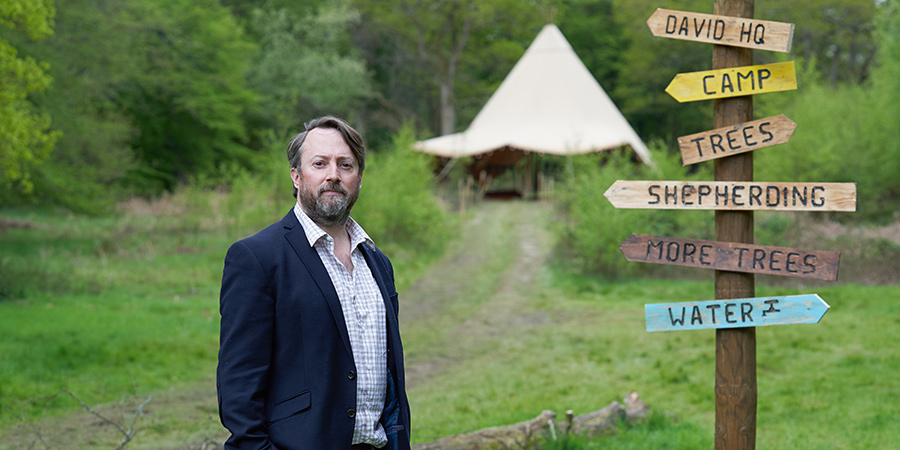 And how did the idea progress from there?

We kept the camping element and the idea of the comics winning badges but made it more about humans wanting to survive, albeit in a comic way. Also, we originally envisaged it as partly a studio show, but then to be true to the idea of survival, we moved it completely outdoors and it was all filmed in a week. Hopefully it looks fresh and bucolic and different from your standard panel show. The comics are all talking about it in situ, not three weeks later in the studio, trying to remember what happened when they were trying to light the fire or whatever. And it was really fun being out in the woods talking s**t to each other.

Lots of people turned to DIY or crafts during lockdown as a way of passing the time or being mindful, or because it was hard to get people to come and do work on your house. Did you have that experience?

Very much not. And actually, I'm glad you raised that, because that was one of the reasons I liked this idea. My feeling is that when people say "We need to get back to the wild and learn how to survive", that's futile for me. I fundamentally think that, comedians more than anyone else, are wedded to quite a complex civilisation and if it starts to break down, we're toast. I'm on Team Maintain The Infrastructure.

But hopefully that's what's interesting about the show: finding that dialogue between the view that, for better or worse, we're always going to need power stations, versus the idea that perhaps we need to spend a bit more time remembering the stuff of life. 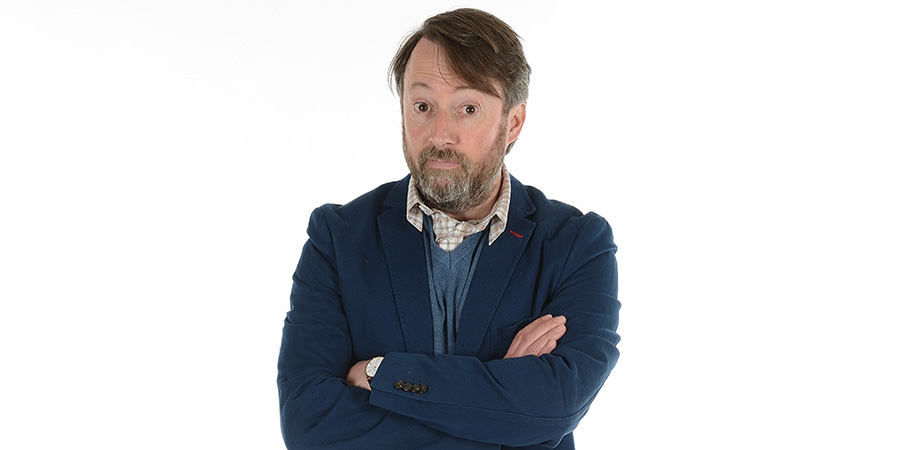 Can you talk us through format for Outsiders: how does each episode work?

We split the six comics into three pairs and essentially in each episode we set tasks which will either help you survive, or at least help you find this new existence - without town and cities and people - more psychologically bearable. So we have survival things like cutting down trees and milking goats but we also have things like "Come up with a flag and religion", because all societies have needed that. That's how millions and millions of our forefathers got through the bleakness, by finding stuff to think about and believe in, other than the toil of just trying to keep yourself alive.

And you are the judge and jury?

I am. Not executioner, though. But yes, I award badges to the pairs who I think have done well.

How did you enjoy that role?

It's always fun to have arbitrary power in a parlour game panel setting. I did feel sincerely admiring of their efforts. They all tried very hard and really went for it. My instinct was to give them all badges all the time because they were doing something very unusual which was not just "sit behind a panel desk and be sarcastic".

Were you ever in the Scouts yourself?

I was never one. I was encouraged by my parents to join the Cubs but I resisted. As far as I was concerned, I had one peer group to try and survive in, and that was school, so the last thing I wanted was another group of people in the evening finding me difficult and awkward.

Talk us through the comedians. Are they fit, outdoorsy types? 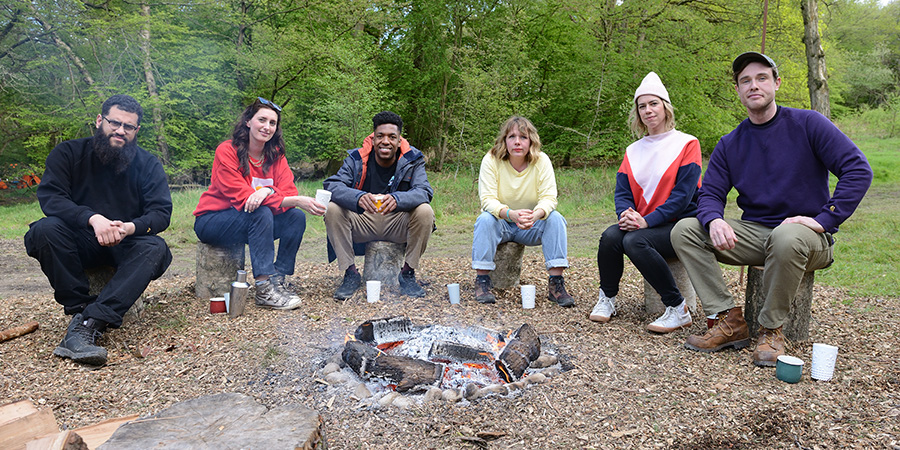 They did actually turn out to be pretty outdoorsy. Kerry Godliman announced herself as a very, very keen camper at the start, but seemed less keen in reality. She talked a good game. It was funny to watch her and Toussaint Douglass as they had a very funny dynamic in that he felt he was doing everything while she just talked about how much she was into camping.

Everything that possibly could go wrong, went wrong for Ed Gamble. He went into it thinking, "I'm a winner and an achiever and I'm going to be great at this" but it ended with a mixture of bad luck and him being wrong about his capabilities. He ended up in many uncomfortable scrapes but he's a very funny man. Which was fine because the last thing we wanted, from the point of view of making a funny programme, was for everything to go smoothly.

He was paired with Lou Sanders, who is great. Her approach to it contrasted so much to Ed's. Ed wanted to tick all the boxes and get everything just right, and Lou didn't give a s**t.

Jessica Knappett was brilliant and funny throughout. She and Jamali Maddix had a great double-act. She became a sort of adoring pretend-wife to him while he grumpily went out and did his stuff. Jamali had a real survival streak. I think he had an instinct for surviving under those conditions that was simultaneously incredibly impressive but also quite amusing.

You didn't camp with them, we assume?

Absolutely not. That was written in to my contract at a very early stage.

Was there any difference between the way that the men and the women tackled the tasks?

I don't know, because each pair was a man and a woman and I was more conscious of the difference between the pairs. I think men and women motivate each other. All three couples had one person slightly moaning about the other one, and implying that the ideas and effort were coming primarily from them. Any difference between the sexes there seems like a constant among humans.

Can you describe your HQ to us?

It's a big tent which was dressed by the art department to be a parody of my personality. So there are various military charts and slightly olde-worlde furniture. It was a very comfortable place to pontificate in a lovely location on the top of a hill in some woods in Hertfordshire. It was great and we were pretty lucky with the weather actually. 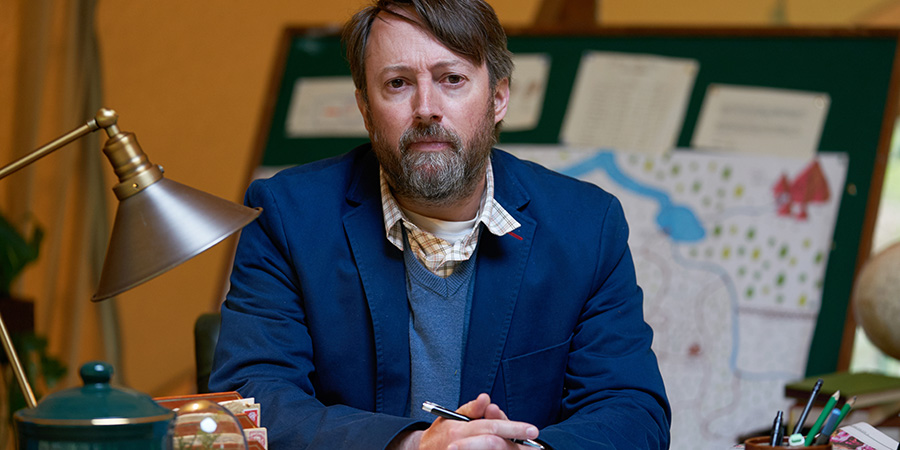 And your outfit? It didn't particularly scream 'country' to us.

Well I thought if I wore something practical, people might actually ask me to do something practical, which I didn't want. So it was my usual clothes with an umbrella and wellies. I was also, on some days, wearing several layers of thermals. But I was very much, as you say, dressed for the town or the studio.

How would you have got on as a contestant if the roles were reversed?

I think I would have done extremely badly because I think my fundamental view when trying to do something like that is, "This is not something I should be doing". This is where I believe in a specialist economy and I believe people should do the thing for which they have an aptitude. Whenever I try to do anything practical, all I can think is, "There are people for whom this would be so much easier." I just have to hope that I can do something that other people would find hard, things that are completely unnecessary to survival like thinking up jokes and writing newspaper columns. Those are all things that, in a complex civilisation, you can earn a living doing, luckily, and therefore I can get food and shelter via that. I would not survive in a basic society that relied on me being able to build things.

If the world does one day collapse, and we all need basic survival skills, how do you think comedians will fare, having made this show?

I think there is a ruthlessness in anyone who's got any kind of career in showbusiness which probably, when it comes to it, is more important than a specific aptitude of how to do things. On some level, our comics had a need to get through this while still making jokes and that force of will is, I think, something that comedians have in abundance, more than the average person. 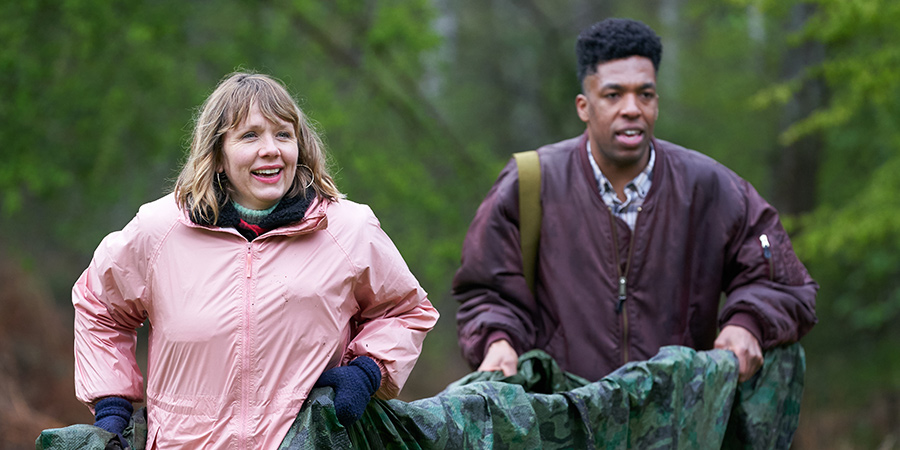 If you got a second series, who would you like to see taking part?

I would love to see Tom Allen having a go, although he'd find the disgustingness of the outdoors a challenge as he's always very pristine.

I'd love to see Alan Davies have a go, I think he'd actually be pretty good at it. Sara Pascoe would be very funny and might be surprisingly good at surviving. I think largely I'd be looking at people who wouldn't like it at all, though, because that would be funnier.

What was it like working with Dave on this?

They were really great to deal with. They were very up for the idea from the start, and welcoming of all our thoughts. They let us get on and make the show we wanted to make and they now say they're very pleased with it so they were an exemplary channel to deal with, really, because your worry always is that either the channel won't care about the show, or it will try and change the show in a way that stops it working, and we had none of those problems at all.

Outsiders is on Dave on Wednesdays at 10pm.