Dad is suffering from a terrible hangover, and it seems worse as he struggles against the issues of his family.
Preview clip 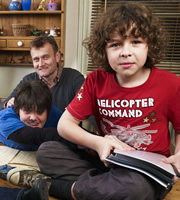 Dad is suffering from a terrible hangover, and it seems worse as he struggles against a rising tide of superstition, astrology and conspiracy theories that seem to be taking over the family.

Ben takes time off from re-enacting the crusades to show a couple of prospective buyers around the house.

This episode was a week later than originally planned due to a political leaders debate on BBC One.

There's a pigeon in the kitchen.