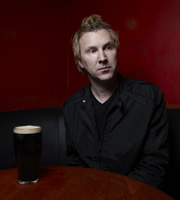 Twenty two years ago, Dublin native Jason Byrne snuck into his home town's revered Olympia Theatre to see Billy Connolly for free. Now he's back to perform for Dave's One Night Stand, and this time he doesn't have to sneak in - his name is up in lights!

The latest in the stellar line-up of comedians going back to their hometowns to perform, the award-winning comic holds court in front of his people, talking about subjects like what it's like to be married and what it would've been like if Hitler had taken over Ireland during the war. Milton Jones and Rob Rouse provide sterling support.