Bristolian Mark Watson goes back to his roots, with support from the outrageous Andi Osho and the inventive Alex Horne.
Preview clips 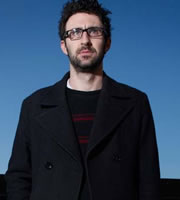 In this week's edition of Dave's very own stand-up comedy series, Dave's One Night Stand, funny fella Mark Watson takes to the stage.

With four novels, numerous radio shows, TV slots, an innovation award and a whole host of stand-up on his CV, the comedian returns to his home town of Bristol to take viewers on a tour of his life.

Before headlining a one-off show at the Bristol Hippodrome, Mark checks in on his old school and local train station, whilst revealing a few home truths - he is still in touch with every girl he has ever kissed and he had an irregular part Welsh part Bristolian upbringing.

From frisbies to hip-hop and cricket to hype, expect an assortment of jokes and witty banter. Watch out for gag highlight involving marriage, compromise and the London Eye.

As well as Mark, there is more gems of laughter with support acts Andi Osho and Mark's pal Alex Horne with a musical masterpiece.

Poor Mark got in a little pickle whilst sitting at Bristol Temple Meads next to a man with "wandering" hands.

The surreal stand-up on the delights of Chat magazine - a French publication about felines apparently.

How do auctioneers ask for sex? The headliner of Dave's One Night Stand from Bristol has the answer.