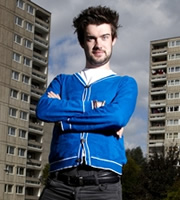 Jack Whitehall shows off his family home and fencing outfit before deciding he's just not tough enough for Dave. Instead he goes all 'street' at a tower block and visits his pretend parents at the local Chinese takeaway. They're baffled and think he's Russell Brand.

Whitehall is then joined by top comedians David O'Doherty and Andrew Lawrence for a night of comedy fun in the Theatre Royal, Haymarket. Lawrence discusses Australians in London and etiquette when dealing with mechanics. O'Doherty gets out his keyboard for some musical comedy and even does a duet with South American warbler Shakira. The sound is quite uncanny. With even more Jack Whitehall to finish, it's the perfect comedy feast.

Jack Whitehall talks about his photo.

Channel Dave caught up with Jack Whitehall in his dressing room straight after his Dave's One Night Stand show and made him talk to us.