This week Ben Elton performs at the Broadway Theatre in his hometwon of Catford, London in his first televisied stand-up in a decade. Featuring support from Jason Byrne and Tom Stade.
Preview clip 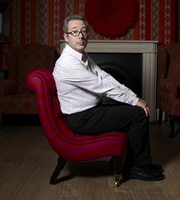 In the first episode, join Ben Elton as he returns home to Catford, South London to host a night of riotous stand-up with special guests Jason Byrne and Tom Stade. Filmed at the Broadway Theatre, Ben entertains the locals and the nation with his first televised stand-up show in ten years. Topics that light up the stage are the rebranding of creationists, pube jokes through the years and the world before digital cameras.

A clp from episode one of Dave's One Night Stand, featuring Ben Elton.