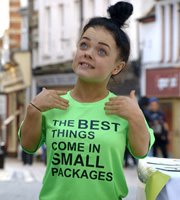 Featuring a cast made up entirely of actors with a disability, people who have a knack for causing mischief and mayhem.

The series, which usually sees fun loving OAPs hitting the streets of Britain to prank and play tricks on an unsuspecting public, will this time feature a cast made up entirely of actors with a disability who have a similar knack for causing mischief and mayhem.