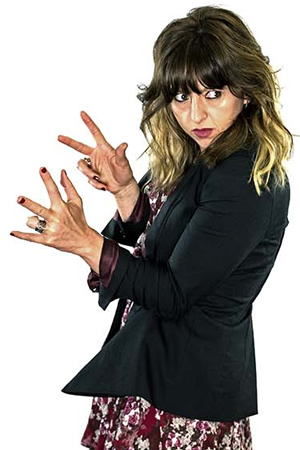 Jo Hartley explains how Danny is an addict and her character Angela is an enabler.

Hi Jo. Could you tell us a little bit about your character, Angela?

Mysterious, naughty, adventurous, unpredictable and persuasive. And she has a huge heart.

What was it about NSFW that attracted you to the project?

It was the story, the cast involved, the director and the opportunity to work with a bunch of really talented people and be part of a great collaboration. Also, Angela is a character I haven't played before and I wanted to see what I could bring to it. I found her very intriguing.

Your character shares a lot of scenes with Danny, played by Sacha Dhawan. What was it like working with him?

We clicked straight away! He's a really intelligent actor - he's very present and he's very giving. He uses his imagination and he's really lovely to work with. We just bonded and the chemistry was instant. Sacha is very accessible and I found him very chameleon-like as an actor. He brings a dryness to the drama but also a humour because he's got a really lovely spirit.

Sacha has mentioned there was a certain element of improvisation in a number of scenes. Is that something that you enjoy doing?

Yes, it is something that I enjoy doing, but you've got to know what you want from the scene. You can't just improvise and take it anywhere, there has to be intention. It also depends a lot on the other actors to whether it is successful - it's about listening.

I've had a lot of experience of improv, working with Shane Meadows. Obviously the scripts for This Is England are written, but we do change a lot of stuff based on intuition. We did change certain things in Not Safe For Work, though it didn't happen too often and it wasn't too drastic. It was something that we were both really up for and I've got a lot of experience with that.

The tone for Not Safe For Work straddles both comedy and drama. How did you find balancing the comedic elements with the darker storylines?

It is a challenge, but I really enjoy doing it. I think real life is dark and challenging and I think I like that about Not Safe For Work. I like the fact that they pushed those elements of it slightly and yet kept it real. I only have my experience in life, so as an actor I have to draw on that, and some of the aspects of Angela were drawn on from my own past. But this is a comedy as well, so you have to balance the dryness of that humour and the level of reality to it.

It's very important to prepare and take the job seriously but then when you get on set you have to sort of throw it away, let it go and react to the other actors but also retain that preparation you've already done too. 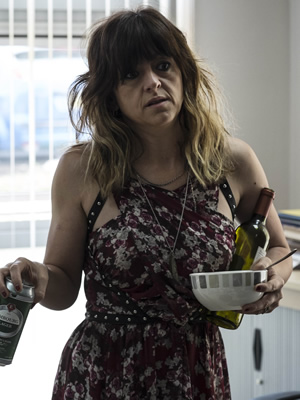 A lot of the action in Not Safe For Work happens in an office. Is this world something you've had experience of?

Yes, I've worked in an office when I left school. I had work experience - it was a YTS scheme at British Aerospace and worked as a secretary when I was 17. I did that for a couple of years. The office environment's not something that I thrive in but I enjoyed it whilst I was there; you meet great people and you make great friends.

I'm a very bad influence on everyone of course! Just kidding! Maybe in a former life I was a bit naughty. However these days I do strive to be a positive influence where possible in others' lives and my own, but I'm far from perfect!

Life experience has taught me that pain is the touchstone to growth. Change is available to us all. Surrendering to problems is key - I try to be open-minded and willing to learn from my mistakes and be teachable and not condemn myself. Humour is important! Perfectionism is death!

I guess I only become useful to others through acceptance, service, love and honesty, which creates a level of authenticity. We all make mistakes and odd choices at times, it's part of life, but the trick is letting go of them and moving past it all into the solution!

Angela is not a fan of change. She wants to live in a deluded fantasy with Danny, keeping him in that safe reachable place - they are co-dependent. Both craving the same thing, initially, until it becomes too painful. Danny's an addict and Angela's an enabler, so that allows a level of comfort for a while, until it becomes messy for them both. I guess they were looking for each other for a reason.

Have you got any other projects in the pipeline?

Yes, I have just finished This Is England 90, which will be out later this year on Channel 4. I'm currently filming the biopic of Eddie The Eagle starring Taron Egerton and Hugh Jackman. It's directed by Dexter Fletcher - I'm very excited! I'm playing Eddie the Eagle's mum, Janette Edwards, it's a great opportunity and I'm having a lot of fun. That should be out 2016.

More Not Safe For Work interviews