The will-they-won't-they tension between Lee and Lucy reaches new highs in this epic series finale for Christmas, as the couple find themselves in previously uncharted emotional water.
Preview clip 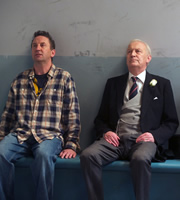 In this action-packed episode, Frank drags Lee on a wild night out on the town - with disastrous consequences, involving a traffic cone, arm wrestling on a zebra crossing and slow dancing together to a Whitney classic.

The police are also interested in a potentially stolen item in Lee's possession. Can our favourite loveable layabout talk his way out of this spectacular mess and still make the most important appointment of his day?

This episode included some of the final scenes to be filmed at Teddington Studios.

I Know What You Think Of Me...

Geoffrey questions if Lee is good enough to marry Lucy.