Lee's father turns up at the flat unannounced. This is the man who walked out of the family home when Lee was four, never paid his maintenance and ate Lee's goldfish. 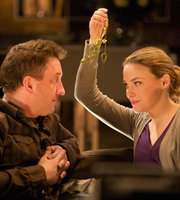 Lee wants him out of the flat but Lucy tells him that the only way forward is to forgive and forget. Unfortunately, Lee's dad's behaviour makes this virtually impossible for Lee to achieve.

This episode was first broadcast at the end of Series 3 repeats by digital channel Comedy Central Extra before having been broadcast on the programme's original home channel, BBC One. It first surfaced there later that year.