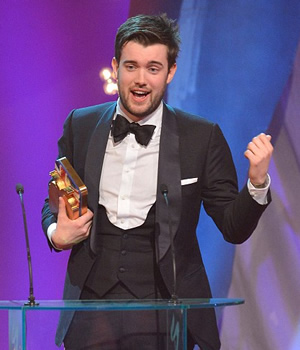 Jonathan Ross has hosted the The British Comedy Awards 2012 at the Fountain TV Studios in London. The ceremony was broadcast live from the Wembley venue on Channel 4, with 13 trophies awarded.

The biggest winner of the night was Sky Atlantic's dark pre-Victorian period sitcom Hunderby, which picked up both Best Sitcom and Best New Comedy Programme titles.

It had been announced in advance that Shooting Stars comedians Vic Reeves and Bob Mortimer were to be honoured with the Writers' Guild of Great Britain Award during the ceremony. Reeves said: "I am most cock-a-hoop over being awarded this most prestigious of trophies", and Mortimer added: "I'm really proud that Jim & I have always written our own guff. It's great to have that recognised."

Young stand-up comic Jack Whitehall (pictured) was perhaps the most notable individual winner of the evening, picking up the King of Comedy title - the only award to be determined by public vote.

Thanking all involved with his shows Bad Education, Fresh Meat and A League Of Their Own, Whitehall quipped: "This feels a little bit like when The Only Way Is Essex got a BAFTA ... but I'm so grateful."

Below is a reminder of the nominees, with winners highlighted in red.

Rebecca Front (for The Thick Of It) - WINNER

Alan Partridge: Welcome To The Places Of My Life

Jo Brand (for Have I Got News For You) - WINNER

Sue Perkins (for Have I Got News For You)

Peter Capaldi (for The Thick Of It) - WINNER

Steve Coogan (for Alan Partridge: Welcome To The Places Of My Life)

Aside from the phone vote category, the winners of this year's awards were decided by the British Comedy Awards Jury, which now comprises more than 50 people. The jury includes a mix of TV executives, journalists, producers, writers and actors.

Below are videos of the winners being announced, and their speeches:

Jack Whitehall is named the King of Comedy:

Rebecca Front is gracious in accepting the Best Actress trophy:

Peter Capaldi explains how he is going to use his trophy:

Jo Brand collecting her award in a pre-filmed video: