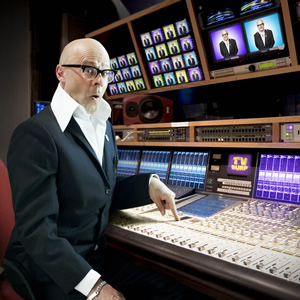 The nominations for the 2012 British Comedy Awards have been announced.

Harry Hill (pictured) leads the nominations, having been named in three separate categories for the final series of Harry Hill's TV Burp.

Nominated for a record seventh year in a row, Hill says: "I am thrilled that my personality has been deemed entertaining enough to be nominated for a British Comedy Award, particularly in this, the last year of TV Burp, and when I next see it I will be certain to let it know. It would be the icing on the cake if it won - but no pressure."

Meanwhile Olivia Colman has two chances to win Best TV Comedy Actress, having been nominated for her performances in both Rev. and Twenty Twelve, becoming in the process the first person in the history of the BCAs to have two nominations in the same category. Meanwhile, Steve Coogan has been nominated for his Alan Partridge character - nine years since he won the Top TV Comedy Actor category in 2003.

Below are the nominations in full, with further details about the awards at the bottom. Click on any programme for a guide to that show.

Alan Partridge: Welcome To The Places Of My Life

Peter Capaldi (for The Thick Of It)

Steve Coogan (for Alan Partridge: Welcome To The Places Of My Life)

Rebecca Front (for The Thick Of It)

Jo Brand (for Have I Got News For You)

Sue Perkins (for Have I Got News For You) 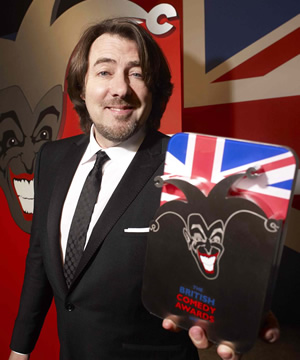 Also to be announced on the night will be the winner of the King or Queen of Comedy Award, as voted for by the public (see below), and two special titles of recognition: 'The British Comedy Outstanding Achievement Award' and 'The Writers' Guild of Great Britain Award'.

Aside from the King/Queen of Comedy Award, the winners in all categories are determined via a jury vote. This year, the judging panel was expanded to over 50 people, from TV executives to actors.

The results of the British Comedy Awards 2012 will be announced live on Channel 4 during a ceremony held at Wembley's Fountain Studios. It takes place on Wednesday 12th December from 9pm, with Jonathan Ross (pictured) as host.

Talking about being nominated against fellow Would I Lie To You? team captain David Mitchell in the Best Male Television Comic category, and also being in the list with Harry Hill and Sean Lock, Lee Mack jokes: "Me and David are deeply, deeply competitive but we'll now pretend we don't mind who the winner is. It's an honour to be in such a strong category because you've got the unfunny speccy fella, the other unfunny speccy fella, the unfunny posh boy or me... so I don't know who's going to win."


The BCA organisers are, once again, running a public vote to crown the 'King or Queen of British Comedy'. The following six comedians are nominated in this category, and voting details are as follows.

Calls cost 35p from a mobile and 35p from a BT landline. Terms and Conditions. Voting closes during the Comedy Awards live broadcast on 12th December 2012.

Sarah Millican, who was last year's winner of the public vote, says she is hoping to win again this year. She comments: "I'm bloody thrilled to be nominated for both the Best Female TV comic and Queen of Comedy at this year's British Comedy Awards. After winning the Queen of Comedy title last year, I've been wearing my crown with pride and hope to keep my hands on it for 2013. Those supermarkets won't open themselves you know."