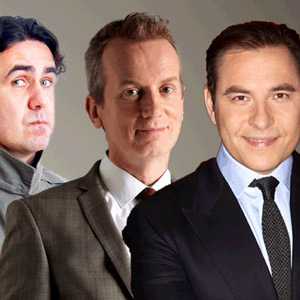 Story update, 9th December 2012: David Walliams has announced he is too busy to host the show, Gabby Logan will host instead.

BBC One has ordered a brand new Saturday night entertainment series with a central panel show element - I Love My Country.

Produced by Avalon Television, the company behind shows including Not Going Out, Harry Hill's TV Burp and Live At The Electric, the series will be recorded in the middle of December for broadcast early next year.

Consisting of eight 50-minute episodes, the Saturday night series will be based around a panel show with David Walliams as host and Micky Flanagan and Frank Skinner as the team captains. Multi award-winning singer-songwriter Jamelia will front a live house band.

Producers say: "I Love My Country will see two teams of well-known British faces from the worlds of sport, entertainment and music battle it out in a contest of who knows the United Kingdom best."

They add: "In this fun packed show we need YOU, the studio audience to get involved and support one of the celebrity teams. And if your team wins, you'll take home a special 'I Love My Country' prize."

The series is based on the Dutch TV hit of the same name created and produced by Talpa, the company of Endemol founder John De Mol.

A pilot episode was recorded in July with Greg Davies as team captain rather than Micky Flanagan. Flanagan had been signed to a 12-month exclusive contract with Channel 4, but with only the very poorly received The Mad Bad Ad Show broadcast during the period - and filmed before the deal was signed - it would appear that his contract has not been renewed.

The show will not be Walliams' panel debut, having also hosted Sky1 series Wall Of Fame in Summer 2011. The celebrity-based series, which ran for 8 episodes between June and August, was not a success and is Sky1's only recent comedy not to return for a second run.

I Love My Country be produced and directed by the team behind Harry Hill's TV Burp, namely Spencer Millman and Peter Orton, respectively.

BBC Entertainment Commissioner Alan Tyler said: "I Love My Country is a funny, boisterous and shamelessly competitive celebration of the United Kingdom, with the perfect host and captains at the core. David, Frank, Micky and Jamelia have a terrific chemistry and we are delighted to be bringing the series to a BBC One audience."

Here's the first episode of David Walliams' Wall Of Fame:

I Love My Country