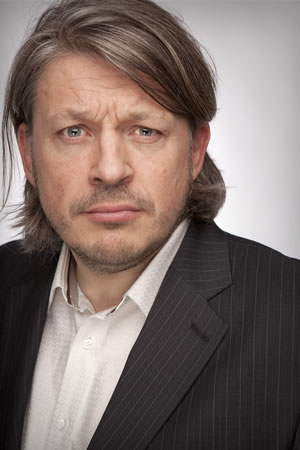 It has been announced that Richard Herring is writing a new satirical sitcom for the BBC called Ra-Ra Rasputin.

The show, set in pre-revolutionary Russia, will aim to satirise modern Britain - highlighting the similarities between then and the current day. Rupert Murdoch, The Banks, The Royals, David Cameron and Rebekah Brooks are all said to be targets of the comedy.

Ra-Ra Rasputin is set in "a time with uncanny parallels to today," with "the super-rich partying their way to disaster, whilst the poor starve". The show features corrupt newspaper bosses and police chiefs, aristocratic public school educated politicians who have an arrogant disregard for the people they rule over, greedy bankers and a benign but out-of-touch and superstitious monarchy.

Herring says: "Throw into the mix the mysterious Holy Man, Grigori Rasputin (his friends call him Ra-Ra), who rises from the faceless masses to superstardom celebrity, all thanks to his uncanny healing abilities and his previously uncredited invention of Europop. The ghost of Rasputin rises to give an unreliable memoir of his life, but one which holds up a mirror to our own corrupt culture - all to a thumping disco beat. Because if you're going to dance into the abyss, you might as well do so in glittery platform boots.... oh these Russians. He was the lover of the Russian Queen and remember in 1916 it wasn't so easy to shag a member of the royal family."

The programme is being developed by Avalon Television, the production company behind shows including Not Going Out, Live At The Electric and Russell Howard's Good News. They describe the show as "taking a pinch of Blackadder, a smidgen of 'Allo 'Allo!, a pinch of Baron Munchausen and a big dollop of 70s eurodisco to create something surreal, satirical and slightly insane, which will be unlike anything you've ever seen."

Herring, who rose to fame in the 1990s in a double-act with Stewart Lee, is now mainly known for his stand-up work. However, he has previously written the 2007 ITV comedy drama You Can Choose Your Friends and Al Murray's sitcom vehicle Time Gentlemen Please.

In 2010, when the comedian appeared on Celebrity Mastermind, he scored an impressive 35 points with Rasputin as his specialist subject.

Herring is currently performing at the Edinburgh Festival. His main show is called Talking Cock, and he's also presenting a daily podcast chat show, which can be downloaded from British Comedy Guide or via iTunes, where it is currently riding high in the charts.

Herring appeared in a number of press articles earlier in the month when he blogged about dwindling ticket sales at the Festival, commenting "The Fringe has got too big and there are too many comedians and the bubble is probably about to burst."