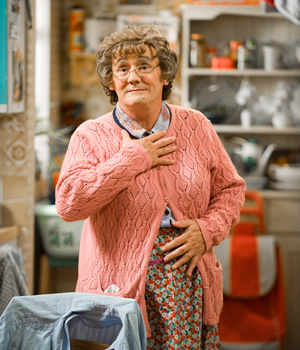 BBC One has ordered a pilot episode of a game show spin-off from its hit sitcom Mrs. Brown's Boys.

Trade magazine Broadcast reports: "The studio format will see two contestants competing in a comedy quiz in which they are helped by five celebrities from sport, music, TV and film. Once a contestant has won, they will go through to the final round where they will have to use the celebrities' knowledge and brainpower to win their prizes."

If the pilot proves successful, the corporation intends to broadcast a full series on Saturday nights in 2013. The 40 minute non-broadcast pilot will be recorded later this year.

This move comes as the BBC looks to capitalise on the success of Mrs. Brown's Boys, which has been a huge ratings hit for its flagship channel. The programme, which won a BAFTA this year, averaged just under 7 million viewers across its second series, making it by some significant margin the BBC's most-watched sitcom of 2012.

Broadcast quotes BBC commissioner Alan Tyler as saying: "Mrs Brown is one of the crown jewels of BBC comedy. We are delighted that she is welcoming some famous faces into the family, and we are equally thrilled that she is continuing to make herself at home on BBC One."

Andy Culpin from the company behind the show, 12 Yard Productions, addeed: "Mrs Brown's unique take on life is sure to provide an entertaining and unpredictable show that will appeal to old and new fans alike."

A third series of the sitcom is currently in development, and O'Carroll is also reportedly working on an animated version of the comedy.

Below is a clip from the last series: