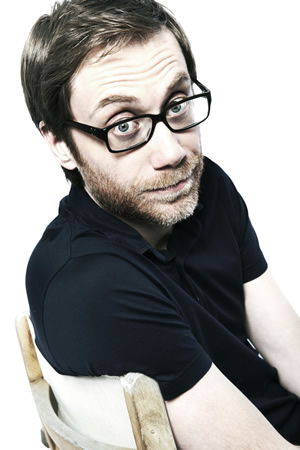 Stephen Merchant is set to write and star in a new HBO pilot. The comedian - who has co-created The Office, Extras and Life's Too Short alongside Ricky Gervais - is currently working on a script for the American broadcaster.

The sitcom, loosely based on the premise of his 2011 live stand-up tour Hello Ladies, will see Merchant playing an Englishman looking for love in Los Angeles.

HBO - who have also created the animated version of The Ricky Gervais Show and co-produced Life's Too Short with the BBC - are making the Hello Ladies pilot in association with Disney-owned ABC Studios.

According to US websites The Hollywood Reporter and Deadline, the pilot episode of the show will be filmed later this year, with Lee Eisenberg and Gene Stupnitsky helping the British comic with the script. The American duo have previously acted as writer-producers on the US version of The Office, created the hit movie Bad Teacher, and have a hand in the upcoming Ghostbusters 3 story.

Describing the new pilot, Deadline says the show will star "the 6ft 7in Merchant as a gawky Englishman searching for the woman of his dreams in Los Angeles. Half as charming as he thinks he is - and twice as desperate - he's obsessed with infiltrating the glamorous world of beautiful people. Unfortunately the beautiful people won't let him in."

Here is a clip from Merchant's Hello Ladies DVD: