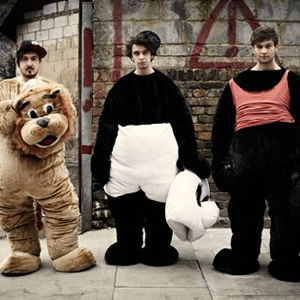 E4 has announced that it is planning a bold, big-budget marketing stunt to promote The Midnight Beast, a new musical sitcom coming soon to the channel.

On Thursday 28th June at 10pm, the channel will screen a live music video performance featuring the stars of the show. Broadcast in real time from The Fountain Studios, the promo will feature a moving set, numerous costume changes and ten dancers.

The band will perform an exclusive premiere of Big Boys, a song from the show that tells the story of their journey from YouTube to their own television show.

On air trails broadcasting from today will encourage viewers to take to Twitter using the hash tag #unleashthebeast if they want to see the stars of the show wearing just a strategically-placed sock by the end of the broadcast.

The Midnight Beast, which is due to be broadcast on E4 in early July, is a six-part musical sitcom starring Stefan Abingdon, Dru Wakely and Ashley Horne. The trio are already big internet stars, with their comic music videos having clocked up more than 50 million hits on YouTube to date.

Penned by experienced writers Jason Hazeley, Joel Morris and Tom Edge, the TV series follows the fictional life of the band as they have to cope with day-to-day challenges like sharing a dingy East London flat and trying to impress girls when they have no cash and one of them has to sleep in the kitchen. New musical videos from the band are intercut with the sitcom action.

Talking about the promo, E4's Marketing Manager Alex Walker-Sage says: "In the most technically challenging campaign we've ever done, we're giving The Midnight Beast's amazing performance skills a national platform on E4. By giving their passionate fan base a means to influence what happens, we're looking to engage a wider audience in the Midnight Beast phenomenon."

Alex Mathieson, who is directing the stunt, adds: "We're aiming to create a promo that perfectly represents The Midnight Beast. The band have been hugely collaborative in creating an exciting live trail that showcases their talent, ambition, music ability and great sense of fun but also matches the striking visual quality of the show Warp Productions have produced. Multiple set and costume changes, nudity, choirs and a baseball bat - what could possibly go wrong?"

Here's a short trailer for the new TV series:

This is a video for Quirky, one of the new musical creations for the show. It also features Horrible Histories star Simon Farnaby, who plays the trio's perverse neighbour Sloman:

And here is the parody of Ke$ha's TiK ToK that the band published in 2009. This video, which has now been viewed more than 13 million times, was the performance that first brought the trio to the public's attention.