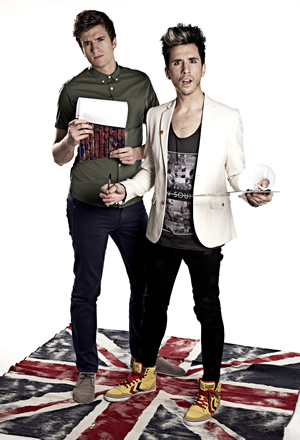 BBC Three has ordered a second run of comedy series Britain Unzipped, less than a week after the first series ended.

Using the results of a specially commissioned national survey - covering everything from working life to bedroom habits and provocation to homicidal thoughts - the hosting duo questioned members of the studio audience, as well as celebrity guests, to gauge how weird or normal their thoughts, opinions and experiences were, regarding a range of subjects.

The series also utilised a number of pre-filmed video segments to illustrate some of the more amusing answers and contrasts between different groups of survey correspondents, plus hidden camera and home visit stunts.

Broadcast at 9pm on Tuesdays (from 24th April) with repeats running throughout the week, the series performed well for the channel with an average audience of just under 500,000 viewers - albeit in a period that is seeing BBC Three struggling to achieve strong ratings, having slumped shortly after new controller Zai Bennett took hold of the channel early in 2011.

In the following clip, hosts Kane and James examine some bedding with TV presenter Holly Willoughby: