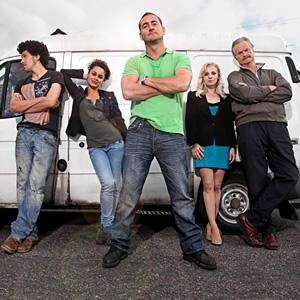 The American pilot for a remake of Adrian Poynton's BBC Three sitcom White Van Man has been ordered for a full series by Disney-owned network ABC, it has been confirmed.

Titled The Family Tools, the show is to star Kyle Bornheimer as Jack - the role created by Two Pints alumnus Will Mellor - with King Of Queens star Leah Remini as new character Terry and Edi Gathegi (X-Men: First Class) as Darren.

JK Simmons has been cast as Jack's father, Tony, with 3rd Rock From The Sun's Danielle Nicolet as Liz. Johnny Pemberton will play Terry's son, Mason.

Poynton told British Comedy Guide: "After the disappointment of the UK show being cancelled this is just the most amazing news. The keys to the van might well be being passed over the pond but they're in very good hands indeed."

The news will be seen as an embarrassment to BBC Three boss Zai Bennett, who cancelled the original ITV Studios-produced sitcom - written and created solely by Poynton - just two weeks ago.

Poynton told us at the time: "We honestly believe we made a second series bigger, bolder and stronger than Series 1 and audience reaction seemed to back that up. Sadly, it seems BBC Three wants to take its comedy output in another direction."

The series followed the adventures of Oliver 'Ollie' Curry, an aspiring restaurateur forced to give up his dreams and take up running the family handyman business when his father begins to suffer from heart trouble. Pitched more against than alongside his supposed 'assistant' Darren, Ollie struggles to keep control of his own life, never mind make a continued success of the small firm.

White Van Man became BBC Three's highest ever rated sitcom debut episode when it broadcast in March 2011, going on to achieve an average of 750,000 viewers over the course of the six episodes - a very healthy figure for the digital channel. However, the second series, which was broadcast in February and March this year, suffered after being moved to a different day and timeslot. It averaged just over 400,000 viewers.

ABC's initial order is understood to be for 13 episodes, with an extension to around 24 likely if the series is received favourably at broadcast.

Here's a clip from the second series of White Van Man.