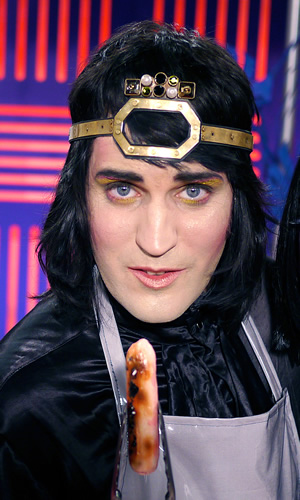 The recommission will come as a surprise to many, with only one - poorly received - episode of the first series broadcast to date. The debut episode met with heavy criticism from many comedy fans, exampled by those posting on British Comedy Guide's message board.

However, there were indications of the recommission even before the premiere broadcast. As reported on our Twitter account last week, the DVD launch date for the first series has been postponed from March this year, to January 2013. Such delays are often signs of recommissioning, as distributors like to maximise awareness of a DVD by releasing it at the same time as a subsequent series begins broadcasting.

Characters introduced in Noel Fielding's Luxury Comedy include Tony Reason, a manta ray music producer who lives in a fish tank under the tree house; Roy Circles, a games teacher suffering from severe shell shock who is also a chocolate finger; Sgt Raymond Boombox, a food loving New York Cop with a knife wound on his arm that talks to him and helps him solve his cases; and Fantasy Man, described as 'a kind of Don Quixote trapped inside an electronic opera'.

The second series, which will be filmed later this year for broadcast in 2013, will introduce further new characters.

Nerys Evans, Channel 4's Commissioning Editor for Comedy says: "Noel is such a rare and brilliant talent we can't wait to work with him on another series of Luxury Comedy; this show feels so modern and pioneering. If Series 1 brought us a talking knife wound and a man with ice-cream for eyes, we can't wait to see where else Noel's comedy mind will take us next."

Noel Fielding adds: "Delighted to get a second series of Luxury Comedy - we'll definitely make the second one more like a Wednesday morning. Channel 4 have been so supportive and given us creative freedom to experiment with ideas and techniques. And I think we can push things further and make something even more out there next time."

The first seven-part series of Luxury Comedy is currently broadcasting on Thursday nights on E4. The second episode is tonight. Below is a clip: