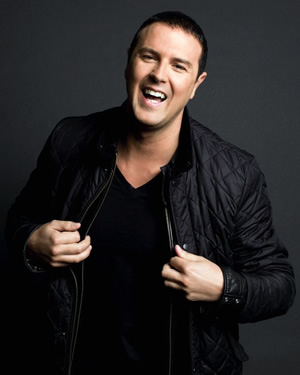 Focusing on 'fun news stories, events and TV clips from every corner of the globe', the eight-part panel show for ITV1 will launch later this year.

McGuinness, who got his big TV break starring alongside Peter Kay in Phoenix Nights spin-off sitcom Max & Paddy, has recently been forging a career as a presenter for ITV. He is currently fronting the third series of the network's hit dating show Take Me Out on Saturday nights.

Meanwhile Rufus Hound, who is also a regular panellist on ITV2's Celebrity Juice; and New Zealand stand-up Rhys Darby - probably best known for his role as Murray in Flight Of The Conchords - have signed up to be the Mad Mad World team captains.

The show is being produced by Roughcut Television, whose other credits include Channel 4 sitcom pilot The Fun Police (which also starred Rhys Darby) and Sky1's new supermarket based sitcom Trollied.

The production company has been working on the format of Mad Mad World for a while. In March 2010 they produced a non-broadcast trial episode under the title They Drink It In The Congo, with Rhod Gilbert and Sarah Millican acting as the captains.

This commission follows on from the successful second series of ITV1's Odd One In, the Saturday night panel show hosted by Bradley Walsh, which averaged over 3 million viewers an episode last year. There is no news yet on whether Odd One In will be returning for a third series.

Paddy McGuinness adds that viewers can expect "lots of laughter and a bit of light-hearted education about the world and its inhabitants. All this and I get to sit down while I host. It's a win-win."

The eight episodes of the show will be filmed at the BBC TV Centre studios on Tuesdays and Thursdays throughout February.