Joe Lycett is to present a one-hour Channel 4 documentary looking at the corporate practice of 'greenwashing'.

Joe Lycett Vs The Oil Giant (a working title) will be produced by the same production company that makes his consumer justice comedy show Joe Lycett's Got Your Back.

The channel says: "Comedian and consumer champion Joe Lycett is set to interrogate the troubling problem of greenwashing, a practice where companies exaggerate their green credentials in their marketing output. The new one-off observational film for Channel 4 will air ahead of COP26, the 26th United Nations Climate Change Conference, which kicks off later this month in Glasgow."

The documentary will see Lycett specifically focus his efforts on energy giant Shell, their marketing, and "their continued exploration for new oil reserves."

Channel 4 explains: "In May 2021, the International Energy Agency released a report with a plan to reach net zero emissions by 2050. The report called for a halt to the exploration and development of new oil fields. That same month, the District Court in The Hague ruled against Royal Dutch Shell, parent company of Shell, judging that the company currently 'disregards its individual responsibility' to reduce its overall emissions, and ordering the Shell group to start reducing them by 45% by 2030. Royal Dutch Shell confirmed in July 2021 that they will appeal the ruling.

"On a quest to hold Shell to account and find out more about their business activities, Joe will meet experts in the field and approach campaigners on both sides of the debate, before making a sensational 'advert' about their activities and attempting to air it on primetime TV."

Joe Lycett says: "The things I've learned making this documentary have been shocking. Expect sarcastic Twitter exchanges, Hollywood stars, me being confronted by some big burly security guards, and a spoof advert depicting the CEO of one of the biggest polluters on earth doing something truly disgusting."

Executive producer Morgan Roberts adds: "It is a joy to be working with Joe on his most ambitious, most daunting project yet. The documentary sees a lovely, fearless, mild-mannered man from Birmingham take on one of the most powerful companies on earth. It seems like a fair fight to us."

Joe Lycett Vs The Oil Giant will air on Channel 4 later in October as part of a raft of Climate Change programming. 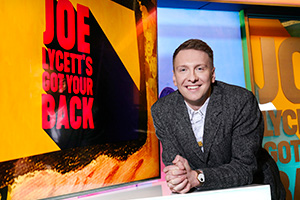