Channel 4 has commissioned Queenie, a comedy drama about a journalist described as "a story about a young Black woman's value and the unrelenting trials and tribulations of life."

The eight-part series has been created by Candice Carty-Williams, based on her best-selling and critically acclaimed 2019 novel of the same name.

Talking about the plot, the producers explain: "She's the woman who by now needs no introduction... Enter Queenie Jenkins: aged 25, Jamaican British and straddler of both cultures, a South London stalwart, journalist, loyal friend, not so loyal daughter and granddaughter, a sometimes catastrophist, an occasional mess, but more often than not an undervalued success - who is always, always enough.

"As Queenie's already loyal subjects will know, she works at a national newspaper where she's frequently forced to compare herself to her white, middle-class peers. After a less than clean break up from her long-term white boyfriend Tom, she finds herself somewhat lost and searching for comfort in all the wrong places, including the beds and backseats of several undeserving men who do a great job of occupying her brain space, but a bad one of affirming her self-worth.

"Surrounded by her 'Corgis', the name bestowed to her brilliant but not always sympathetic bevy of girlfriends made up of Kyazike, Darcy and Cassandra, Queenie finds herself impulsively veering from one regrettable decision to another and asking the big, bruising questions that plague every woman in a world that keeps trying to bombard them with answers, 'What are you doing? Why are you doing it? Who do you want to be?!'."

Carty-Williams, who was a Breakthrough Award nominee in the 2020 South Bank Awards, published Queenie - described as "Bridget Jones's Diary meets Americanah" - in April 2019. It went on to become runner-up for the Comedy Women In Print Prize 2020 and won Book of the Year at the British Book Awards 2020.

Channel 4 says: "Queenie is about heartbreak and bad dates and worse sex. It's about south London and the gentrification that's chipping away at it and what it represents. It's about race, identity, culture and the politics that shape you. It's about the love of friends, the chaos of family and community and all the other varying relationships in-between, but especially the one with yourself.

"Razor sharp, utterly honest, blisteringly funny, and achingly yet beautifully relatable, Queenie the TV series will be full of as much heart and soul as the lady herself. At its core it's a story about a young Black woman's value and the unrelenting trials and tribulations of life."

Candice Carty-Williams comments: "Being able to bring Queenie, her family, and of course the Corgis to the screen, is so exciting to me. And to do that with Channel 4, who has always set the tone for what television is about by pushing the boundaries of what we watch, is an added bonus. It's clear to me that Queenie, a character whose story came to me when I was battling my way through my own messy twenties, is still so relevant today, and it's about time that a show like this can explore why. To adapt and breathe new life into a story that has been talked about across the globe, and to bring Queenie, our problematic fave, to a whole new audience, is such a privilege."

Commissioner Caroline Hollick comments: "Candice is the stand-out voice of her generation and has created an iconic character in Queenie whose honesty, vulnerability and sharp sense of humour shines an unflinching light on who we are today. I'm so excited for this adaptation, and I'm in no doubt that both Queenie and Candice are going to take Channel 4 by storm!"

Executive producer Steve November adds: "Channel 4 is the perfect home for Candice's provocative, timely, hilarious writing and we are delighted to be working with them and Candice to bring Queenie to the screen."

Executive producer Sarah Conroy concludes: "It's been a privilege to work with Candice on Queenie's journey from page to screen and we hope that the many, many fans of the book will love this version of Queenie and that the adaptation will allow new fans to fall in love with this amazing character for the first time."

Filming starts on Queenie in 2022. Casting will be revealed at a later date.

Bridget Jones's Diary meets Americanah in this disarmingly honest, boldly political, and truly inclusive novel that will speak to anyone who has gone looking for love and found something very different in its place.

Queenie Jenkins is a 25-year-old Jamaican British woman living in London, straddling two cultures and slotting neatly into neither. She works at a national newspaper, where she's constantly forced to compare herself to her white middle class peers. After a messy break up from her long-term white boyfriend, Queenie seeks comfort in all the wrong places... including several hazardous men who do a good job of occupying brain space and a bad job of affirming self-worth. As Queenie careens from one questionable decision to another, she finds herself wondering, "What are you doing? Why are you doing it? Who do you want to be?" - all of the questions today's woman must face in a world trying to answer them for her.

With "fresh and honest" (Jojo Moyes) prose, Queenie is a remarkably relatable exploration of what it means to be a modern woman searching for meaning in today's world.

Winner of the British Book Awards "Book of the Year" - writer Candice Carty-Williams is the first black author to win the award - and currently nominated for the "Published Comic Novel" award in the Comedy Women In Print Prize.

Narrated by Shvorne Marks.
Get this audiobook for nothing by signing up for a free trial of Amazon's Audible 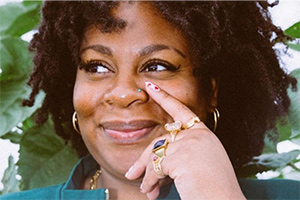