Complaints Welcome sees the three comedians join forces to assemble a "complaints committee" of viewers who have "plenty to say about the television shows getting the nation talking each week".

Across the six hour-long episodes, the three hosts will be joined in the studio by guests "from the world of telly". The panel will "playfully dissect the week's televisual complaints, looking for resolutions, and ultimately deciding whether the viewers' feedback will be upheld or rejected."

The producers add: "From daytime to documentaries, preschool to politics - no genre of TV is off-limits."

The format will feature sketches, stunts and studio discussion "covering all aspects of TV."

Tom Allen explains: "Jess, Munya and I will be putting TV on trial. If you've got an opinion on anything from the corsets in Bridgerton to a frown about Countdown, we want to hear from you. Complaints Welcome will be standing by to review the reviews viewing viewers viewed."

Channel 4 commissioner Phil Harris comments: "If there's one thing we love more than telly, it's complaining about telly. Munya, Jess and Tom will get to the bottom of viewer complaints in their own sharp, satirical and unique way."

Iain Wimbush from producers Rumpus Media says: "We all have axes to grind and stuff that irritates us, even with our favourite TV shows - and now the brilliant Munya, Jess and Tom get to calmly take these grievances out of our hands, and sort each issue out with comedy sketches, investigations and debate. It's really very exciting."

Complaints Welcome will air later this year on Channel 4. 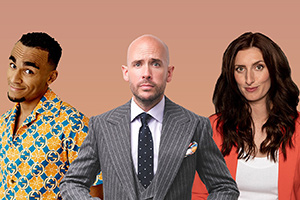