TV channel Gold is making Billy Connolly Does..., a five-part series which will provide "an unrivalled glimpse into his life" as the comedian looks back on 50 years of stand-up.

Billy Connolly says: "I'm really looking forward to sharing a few of my favourite moments from over the years... it's been brilliant, and I hope you'll come along for the ride!"

Talking about the five hour-long episodes, the producers explains: "With exclusive access to one of Britain's greatest and most influential comedians, Billy Connolly Does... will see Billy take a trip down memory lane as he gets to riff on his old sets from the past 50 years. He'll also reflect back on how his views have (and haven't) changed on a variety of topics, since he put the banjo down and started telling his shaggy dog stories.

"Each episode will cover a particular topic, whether that's work, sex, travel, childhood and parenthood or love and marriage and will showcase classic and hidden treasures of Billy's stand-up routines.

"The series, which is shot in and around his Florida home, will provide an intimate guide to Billy's relationship with his material, as well as offering insights into his life."

Commissioner Iain Coyle comments: "So, this is a career highlight, working with one of, if not THE, greatest comedians of all time. I feel incredibly privileged that Billy and his family have given us access, not only to his incredible archive, but also to their everyday lives."

Channel director Gerald Casey adds: "We're thrilled to welcome the legendary Billy Connolly to Gold. Moonshine Features have secured incredible access for this series and we can't wait to hear all of the hilarious and, at times, ridiculous life lessons from one of the all-time greats."

Moonshine series director, Mike Reilly, comments: "I've been lucky enough to have worked with Billy for some time now and the one thing that never ceases to amaze me is how easy he makes it for everyone to be in his company, how the laughter, the pearls of wisdom and the shaggy dog tales never seem to stop. To have the opportunity to show all of that while trawling through a treasure trove of amazing comedy is just a dream come true."

This new format joins the list of TV documentaries about the comedian that have been produced since he announced his retirement. Last year saw the broadcast of Billy And Us, Billy Connolly: It's Been A Pleasure and Billy Connolly: Life, Death And Laughter.

Billy Connolly Does... will be broadcast on Gold later this year. 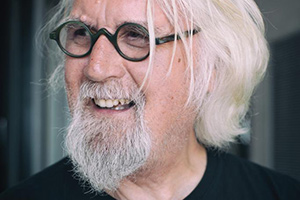