Forget the Friends reunion, Black Books fans can start getting excited about a retrospective celebration of Dylan Moran's sitcom.

Bill Bailey, who co-starred in the three series of the cult Channel 4 comedy about irascible bookseller Bernard Black, alongside the Irish stand-up and Tamsin Greig, has revealed that there are plans to reunite the creative team behind it.

Although a new episode of the sitcom, which aired from 2000 to 2004, is unlikely, Bailey told ABC Radio Adelaide that "there are moves afoot to get us all back together on an anniversary Zoom kind of call [or] chat sort of thing.

However, he cautioned that "I don't know, it's a bit vague at the moment". But he concluded: "I think it may happen."

Starring Moran as the misanthropic Black, Bailey as his put-upon assistant Manny Bianco and Greig as his neurotic friend Fran Katzenjammer, the first series of Black Books was written by Moran with Father Ted creator Graham Linehan. Moran predominately wrote the subsequent two series with the duo Kevin Cecil and Andy Riley (Veep, Year Of The Rabbit).

Speaking warmly of his memories of making the show, Bailey said: "The scripts are very funny.

"Even just the readthrough we were laughing at the scenarios. We realised it was going to be a funny show. But you never quite know how it's going to pan out ... it's all a bit of an unknown."

Recording the sitcom with a live studio audience also lent it a distinctive absurdity.

"Because me and Dylan are both comics, we're not proper actors at all, we wouldn't do the same line exactly the same as an actor would, we would just muck about with it and say something else or try to make each other laugh" Bailey recalled. "We'd try and trip each other up or come up with something else, just to get the audience to laugh.

"There's a kind of spontaneity, almost a kind of anarchy that was happening on set which I think really got bottled into the show. I think there's a sense of that, a sense of utter fun and just joyousness that we were experiencing that just got captured.

"There's a sort of freewheeling, improvisatory quality to some of it. Plus, the fact it was grounded in great characters and great scripts, a rare combination."

Earlier this month, British Comedy Guide revealed that Moran is making a psychiatry-based sitcom for the BBC, his first lead role since Black Books.

Bailey, who this week reiterated his desire to represent the UK in the Eurovision Song Contest, was speaking to ABC Radio Adelaide to promote his winter touring dates in Australia.

Elsewhere in the chat he praised The Two Ronnies and particularly the musical routines of Les Dawson for fuelling his desire to become a comedian, revealed that he sky dives for relaxation and paid tribute to his "very active" builder grandfather for inspiring his work ethic. 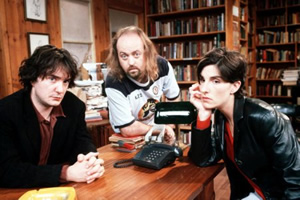