The comedy, which has been in development for three years, is being made by Episodes star Stephen Mangan's production company Slam Films and his brother-in-law, writer-producer-director Robert Delamere, who last year executive produced Max & Ivan's podcast Fugitives.

Gonzalez also appeared in Bleak House Guest, a 2019 comedy directed by Delamere and made by Slam Films for Sky Arts's strand of Urban Myth shorts, which starred Mangan as Charles Dickens, Monica Dolan as his long-suffering wife Catherine and Ian Hart as the melancholic Hans Christian Andersen.

Details of Deep Heat's plot have yet to be revealed. However, Gonzalez and former professional grappler Olesker, who played useless digital strategists Ben and Jerry in W1A, have hosted a series of popular wrestling shows between comedians at recent Edinburgh Fringes.

The duo's Radio 4 series The Casebook Of Max And Ivan, in which they played private detectives, featured a 2015 episode in which they investigated a series of sporting injuries at a sink school, with a guest cast that included Jessica Hynes, Tom Parry and Lewis Macleod. 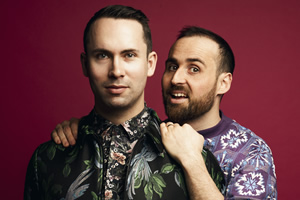