David Mitchell will host Outsiders, a comedy entertainment series for channel Dave in which a group of comedians are challenged with outdoor tasks.

UKTV says: "Outsiders sees David challenge a returning cast of three pairs of comedians to prove they've got the mettle and skills to thrive in the great outdoors."

Six hour-long episodes are being made, with the same comedians featuring across the run of episodes.

David Mitchell, who co-developed the format with producers Renegade Pictures, says: "Civilisation is clearly crumbling so it's high time we worked out whether we can cope without it. And if you can think of a better way of doing that than making six comedians learn survival skills, then you weren't involved in the development process of this programme."

Commissioner Hilary Rosen says: "It's a huge pleasure to welcome David to the channel. After a year of being locked up at home we're looking forward to seeing David throw our teams of Outsiders back to nature to see if our comics can rise to the many challenges he will set them."

Dave channel director Steve North adds: "David Mitchell is someone we've wanted to work with on Dave at the channel for a very long time. Outsiders is sure to be a brilliant addition to the channels' biggest ever slate of new shows that we're announcing today."

Harry Lansdown from Renegade Pictures comments: "We are all excited to see how our comedians will fare, living together deep in the forest, under David's iron rule, and without an Uber or Deliveroo in sight."

Outsiders will air on Dave later this year. It is one of a number of commissions announced for Dave today. The channel also revealed The Island hosted by Tom Allen, comic travel show British As Folk, Question Team hosted by Richard Ayoade and Meet The Richardsons Series 3. 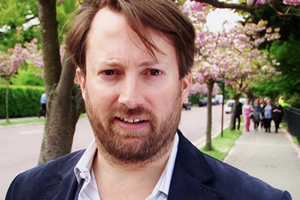