Rob Beckett and Fay Ripley are also attached to reprise their roles as team captains on the television trivia quiz an ITV spokesperson told BCG.

Production is underway on new episodes, which are expected to air later this year.

Made by Livewire Pictures, a co-venture from Hat Trick Productions (Have I Got News For You, Derry Girls), talent agent Anita Land and producer-director Guy Freeman (Fist Of Fun, Noel's House Party), TV Showdown draws upon on Sinha's status as a quiz champion and being one of the Chasers on fellow ITV gameshow The Chase.

Sinha, who has Parkinson's disease, didn't feature in the most recent series of The Chase because of illness. But fellow Chaser Anne Hegerty has suggested that he is now well enough to return for future episodes.

He has also been commissioned to make a third series of his Radio 4 show Paul Sinha's General Knowledge. 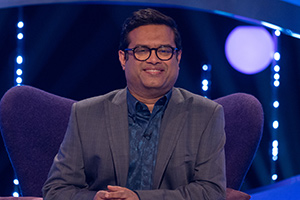