Wife After Death is the story of Geordie thirty-something Cheryl Benson, who lost her husband Kirk eighteen months ago after he was accidentally killed on the Tyne Bridge following a boozy night out with his mates.

Mother to five-year-old Paige, Cheryl finds herself back in her native North East, living, temporarily she hopes, with her mother, ageing hippy Greta, and working in Shop-Rite supermarket. She's not on the lookout for another bloke but does find herself in a regrettable situation with Kirk's erstwhile best mate, the charmless Terry.

Wife After Death draws from elements of Brownlee's blog and subsequent memoir, the 2014 Sunday Times bestseller Life After You. In the book, she recounts the two years of her life that followed the death of her husband Mark in 2012 at the age of 37 from a catastrophic heart arrhythmia while they were having sex, leaving her to bring up their daughter alone.

"I have always approached life with gallows humour, so dealing with the fact of my sudden and untimely widowhood was no different" she told BCG. "After all, the line between comedy and tragedy is often easily blurred. While Wife After Death is not my story, it draws on some of my experiences, all told through an irreverent and sometimes unexpected lens."

Wife After Death is being produced by Kelly McGolpin, head of development for Objective, and Charlie Lewis, head of comedy.

The All3Media Award won by Brownlee is given to the best TV comedy script by an unproduced, unrepresented writer. She has now acquired an agent and is currently developing her first play and two further television scripts, a comedy about a netball team and another project with her brother Nick, a journalist and novelist.

When told by Sarah Vignoles, talent schemes director of the TV Foundation, and judge Hannah Griffiths of All3Media that Wife After Death had won, "I actually asked Hannah if she could repeat what she'd said" Brownlee recalls.

"I didn't believe the information my ears were telling my brain. Bringing the characters and their stories to life had been a labour of love, and the fact that other people - these people! - liked it was a huge validation."

One of Richard & Judy's Autumn Book Club picks for 2015, described as "raw, riveting and beautifully written" by Andrew Marr, Life After You had attracted "messages from widowed spouses from all over the world telling me how much they appreciated my candour - for describing the seedier aspects of widowhood that they didn't dare admit even to themselves" Brownlee adds.

"Though it tells a different story to the book, hopefully the series will do the same, and throw light on those taboos around grief and grieving that still prevail. I am beyond excited to being working with Objective Fiction on this project - I love their approach and their output, and am delighted that they have chosen Wife After Death for their distinguished slate." 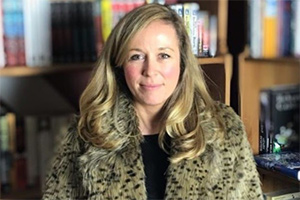