Due to be broadcast as part of the BBC's recently announced Festival Of Funny, the five part series will air nightly from Sunday 7th March.

Producers confirm: "Each show will feature some of the UK's top comedy names, and provide a platform for new and emerging talent from across the country."

Jason Manford (pictured), Jo Brand, Sara Pascoe and Kiri Pritchard-McLean have been announced as four of the hosts, with a fifth to be revealed shortly.

The episodes are being recorded in front of a live virtual audience over three nights from a covid-safe South London venue.

The series is being made by Phil McIntyre Television, who filmed last year's Stand Up For Live Comedy during lockdown, and has previously worked on Live From The BBC.

Series producer Lindsay Jex says: "It has been a dire year for the entertainment industry and stand-up comedians in particular have suffered, so it's great to be working with the BBC again to be able to get comics back on stage and in front of a live audience. We've worked hard to create a bio-secure bubble where comics can perform in front of production staff, plus a virtual audience tuning in from home. The line-ups include a diverse mix of house-hold names and new emerging talent which promises to be a real treat for viewers looking for a bit of a laugh."

Commissioner Shane Allen adds: "Despite the many challenges in mounting this, it's vital to give audiences a much-needed boost with fresh new comedy from established and new comedy stars of tomorrow. Many of the TV sitcom and entertainment stars we love forged their careers on the live comedy circuit and it's crucial we continue to give them the opportunity and support."

Free tickets to be in the virtual audience are currently available via the BBC tickets website.

Funny Festival Live starts on BBC Two on Sunday 7th March at 9:45pm, after The Ranganathan. It'll then continue nightly at 10pm. 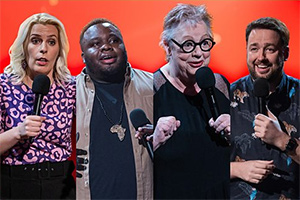