Sky has confirmed that Frayed, written by and starring UK-based Australian comedian Sarah Kendall, is to return for a second series.

Filming has just commenced in Sydney on the six new episodes, with UK-based filming also scheduled.

Talking about the plot, the producers say: "We find Sammy (Kendall) and her kids, having made it out of Australia, living in a tiny London flat while she frantically tries to prove that her lawyer, Rufus (Robert Webb), stole her house. Barely able to make ends meet working in 'exhaust management' (she's a secretary in a muffler repair shop), Sammy is desperate to find a way to reclaim her opulent London life. She must also keep her kids far away from Australia and the truth about what happened to their neighbour.

"Meanwhile back down under in Newcastle, an ambitious cop heads up the missing persons case and simply does not believe Sammy's neighbour would just disappear.

"With Jim (Ben Mingay), Jean (Kerry Armstrong) and Abby (Alexandra Jensen) trying to keep their secret hidden, and con artist Bev (Doris Younane) lurking on the scene, it's only a matter of time until Sammy is called back to be a key witness in the case."

The producers confirmed today that Diane Morgan will reprise her role as Fiona, and that Matt Passmore (Dan), George Houvardas (Chris), Frazer Hadfield (Lenny) and Maggie Ireland-Jones (Tess) will also be in the new series.

Sarah Kendall says: "I'm so excited to be home making Series 2 of Frayed. The last year has been pretty grim, so we're all really grateful for this opportunity to bring back a lot of these frankly appalling characters."

Clelia Mountford from producers Merman says: "We're delighted to be working with Sarah, the ABC and Sky to bring Frayed and its wonderfully dark humour back for a second season. Sarah's bold writing and vibrant characterisation, combined with the cast's fantastic performances received such deserved acclaim for Series 1, and we're excited for audiences to see what's in store as the trail of destruction continues to unfold."

Frayed Series 2 will be ready to be broadcast on Sky One later in 2021. 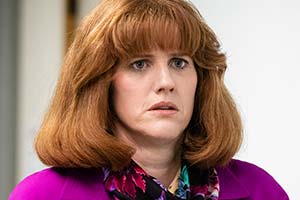