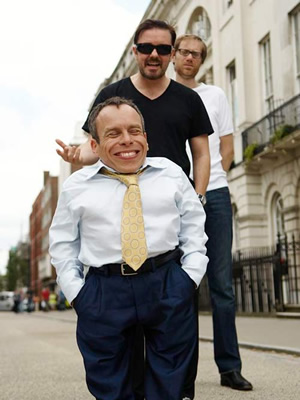 Speaking at an event earlier today, the channel controller admitted that he had spoken to Gervais over dinner last night about two new possible TV projects.

One - which Murphy described as being ready and willing to commission "on the basis of a one-line brief" - would be based around an "unacceptable and un-PC character", a description which inspires instant recollections of Gervais's most well-known comedy creation, The Office's David Brent.

Another show is said to be based around a specific comedian (un-named) who Ricky Gervais is particularly keen to work with. It is thought that Gervais is enthusiastic about working for Sky1 as they have aspirations to become a "British HBO", the American pay-TV network famed for its innovative and cult-hit programming.

The second series of An Idiot Abroad, the travelogue series starring Karl Pilkington, is expected to begin on the channel in a few weeks, and the highly anticipated mockumentary sitcom Life's Too Short for BBC Two in mid-October, starring dwarf actor Warwick Davies.

At a separate session yesterday, Gervais revealed that a spin-off from Life's Too Short featuring Shaun Williamson (aka Extras' "Barry off EastEnders"), Les Dennis and Keith Chegwin is a real possibility.

Gervais also admitted that he has been approached on several occasions in the US - including by one of the big networks - to host his own late-night chat show along the lines of those fronted by Jay Leno and David Letterman, but had turned them down, preferring to create, write and direct his own TV projects.