Bradley Walsh is to host a revival of comic game show Blankety Blank, with a festive episode set to be filmed soon.

The Christmas special, which is believed to be for BBC One, will form part of the channel's December line-up.

Blankety Blank, which revolves around missing words, launched in 1979 with Terry Wogan. Les Dawson took over in 1984, helming the show until 1990.

The format was revived in 1997 with Paul O'Grady (as Lily Savage). It switched to ITV in 2001, finishing in 2002. However, in 2016 ITV commissioned a one-off Christmas special with David Walliams hosting.

Talking about the new version, producers say: "The iconic gameshow Blankety Blank is back for a very festive special! You are invited to join Bradley Walsh as he hosts as a panel of celebrities try to win prizes for some lucky contestants."

The episode will be filmed at Maidstone Studios on Sunday 15th November, in front a socially-distanced studio audience.

Aside from hosting quiz show The Chase, Bradley Walsh has in recent years fronted ITV variety show Tonight At The London Palladium, and acted as a team captain on sports-based panel show Play To The Whistle. As an actor, he'll next be seen on screens playing Pop Larkin in the new version of The Darling Buds Of May. 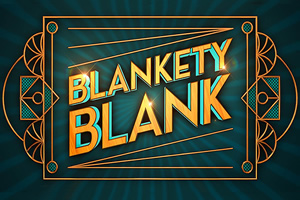