An episode of Spitting Image will be broadcast on ITV on Halloween, for the first time in more than two decades.

Having been revived for a new series on streaming platform BritBox, producers today announced a two-part special focusing on the US Presidential Election, to be published on Saturday 31st October 2020.

The first of the two episodes will then air on television at 10pm.

The broadcast is being described as a "one-off chance" for viewers to see the new Spitting Image, with no further plans to air any of the other episodes on television.

Voting for America's Presidential Election is already under way, with the main polling date set for Tuesday 3rd November. Republican incumbent Donald Trump's primary opponent is Democrat Joe Biden, both of whom feature in the comedy series.

Kevin Lygo, BritBox Originals Creative Chief and ITV's Director of TV, says: "This is a great chance to celebrate Spitting Image's noisy return and give ITV viewers a taste of the full series, available on BritBox."

Jon Thoday, executive producer and managing director at producers Avalon, said: "We are excited to mark the USA election with a double special with ITV and BritBox."

Roger Law added: "Spitting Image returns to ITV for a one-off special on the 31st October at 10pm. Halloween. How very appropriate."

BritBox is a joint venture between the BBC and ITV, with the commercial broadcaster leading operations and controlling a 90% stake in the company.

Reemah Sakaan, Group Director ITV SVOD and Chief Creative & Brand Officer BritBox, said: "We've been excited about the timing of the US election for this series of Spitting Image for months... and it certainly doesn't seem to be letting us down in terms of material for satire."

Originally running for 20 series between 1984 and 1996, the sketch show uses intricate, caricature-designed latex puppets to spoof the rich, famous, and powerful. 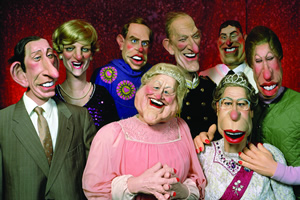