Monster Court, a new comedy entertainment series focused around a puppet-based judge, is coming to CBBC.

The children's channel has ordered 15 ten-minute episodes of the show.

The producers explain: "The show is aimed at 6 to 12-year-olds and is centred around a monster puppet, the Rt Hon Judge Martin Smudge, who dishes out justice for children who send in their light-hearted problems, such as embarrassing parents, boring teachers, bedtimes or being made to do things like eat vegetables or wear shoes. Children apply with their crimes and Judge Smudge delivers justice in the form of a monstrous punishment."

The show has been made by DLT Entertainment, the production company behind hit BBC sitcom My Family.

Production started at the beginning of September with episodes due to air from early 2021 on CBBC.

In response to production challenges related to COVID-19, Monster Court was developed specifically with social distancing safety measures in mind. Children from across the country presented their 'complaints' from the safety of their own home to Judge Smudge via a video link. The whole production was set up so that cast and crew could work remotely, enabling the show to be produced in complete lockdown mode.

The format was devised by David Allison, based on ThisIsYourTrial, his long-running live show aimed at an adult audience. He says: "Of course, after the years of producing ThisIsYourTrial shows across the world, I'm thrilled it's finally made it to TV. It's a huge bonus to have such a talented team of people working on it, who are also good pals of mine. I'm now able to focus on developing my newest formats, ComedyAuction and SickNote, hopefully towards similar results."

Jack Cheshire is series producer with Rohan Acharya as producer. The puppet of Judge Smudge is operated/voiced by comedian Dan Clarkson.

Executive producer Donald Taffner Jr says: "Monster Court is great fun, and we couldn't be happier that CBBC are just as taken with Judge Smudge and his humorous form of justice as we are. We were determined to make sure we could deliver a top quality and thoroughly entertaining comedy for kids, no matter the current COVID situation, and even if further lockdown measures were put in place. The show also marks a step in a new direction for DLT, where we can mix our expertise in the comedy sector with content for the children's market. It's a joy to add Monster Court to our portfolio."

Monster Court will be on CBBC early next year. 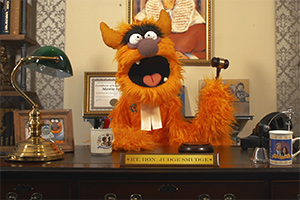