Production is underway on Bloods, a new Sky sitcom about a pair of chalk-and-cheese paramedics.

The series stars co-creator Samson Kayo alongside Jane Horrocks as Maleek and Wendy, who work alongside their fellow ambulance station colleagues through the life-saving world of a south London emergency service.

The series follows on from a 2018 comedy short. Created by Kayo and Nathan Bryon, the show is written by Byron and Paul Doolan, produced by Seb Barwell (Stath Lets Flats) and directed by Will Sinclair (Bounty Hunters).

As the cameras begin rolling, [o]Sky] has announced a number of other stars due to appear in the series. The ensemble paramedic cast will include Lucy Punch (Motherland), Julian Barratt (The Mighty Boosh), Adrian Scarborough (Gavin & Stacey), Kevin Garry (Absolutely Fine), stand-up Sam Campbell, and Aasiya Shah.

The six episodes are being shot on location in South London.

Producers Roughcut explain the show is about "tough-acting loner Maleek and his over-friendly divorcee paramedic colleague Wendy. Their partnership looks dead on arrival. But pretty soon they're giving each other life support. An ensemble comedy, set within the fast-paced, never-ending rush of 999 call outs, Bloods charts Maleek and Wendy's struggle to gain the respect of their fellow paramedics. Each 30-minute episode will bring humorous relief to the world and characters of the paramedic service and recognises the talent of those who put their own lives at risk in an emergency to help keep us safe and healthy."

Samson Kayo says: "I'm super excited to show the world Bloods especially because I almost became a paramedic. Lucky for the NHS, I chose to play the character instead! I'm looking forward to hopefully bringing a bag of laughs to Sky with the lovely team at Roughcut who have some quality comedies under their belt!"

Jane Horrocks adds: "I am very much looking forward to working on Bloods and being paired with the extremely funny Samson Kayo. I know nothing of the world of paramedics, but maybe I need to overcome my fear of blood before I start." 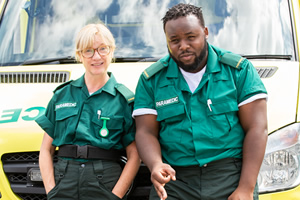