Greg Davies is to star in a new BBC One sitcom.

The Cleaner, about a specialist cleaner of crime scenes "responsible for the removal of any signs of death", is based on a hit German comedy format, Der Tatortreiniger (Crime Scene Cleaner).

After a successful non-broadcast pilot was filmed at the start of the year, Charlotte Moore, Director of BBC Content and Shane Allen, Commissioning Controller of Comedy, have now ordered six 30-minute episodes. The series is likely to broadcast in 2021.

The BBC explains: "Paul 'Wicky' Wickstead, is a state-certified cleaning technician with a very special field of work: as a crime scene cleaner he is responsible for the removal of any signs of death. Wicky works for Shropshire-based cleaning contractors Lausen and is usually found, together with his baby-blue pickup truck, at crime scenes after the police have concluded their detective work.

"Armed with chemicals, scrubbing brushes and cleaning rags, Wicky removes the gruesome mess at the scene of the crime. When carrying out his duties, he stumbles across the strangest of people: from the victim's relatives, employers, neighbours and acquaintances, to occasionally even the murderers themselves. And because he's a sociable type, he sometimes gossips more than he cleans."

Greg Davies says: "As a young man I told a careers adviser that I wanted to mop blood up for a living or be a comedian. He told me with a giggle that neither were real jobs and I should consider learning a trade. Well he's not laughing now is he?!*

"I'm thrilled to be adapting this wonderful show with Studio Hamburg UK for BBC One and can't wait to get cleaning."

Shane Allen adds: "Greg has done a knockout job of repositioning this hit sitcom for the UK audience. Wicky is a thoroughly decent everyman whose differing work situation each week brims with comic flourishes and opportunities to test his moral fibre. As with Ghosts and The Goes Wrong Show we're keen to back distinctive ideas that play with form and tone for a mainstream BBC One audience and take the sitcom in to unexpected new settings."

Vivien Muller-Rommel, Managing Director of producers Studio Hamburg UK, says: "We are very excited to be partnering with the BBC, the Holy Grail of British comedy, on this show. Greg Davies has always been our top choice to portray our charmingly chatty protagonist, and we couldn't be more delighted that he's also writing the series. In times of a global pandemic, we all need more comedies. Fortunately our protagonist already wears a mask by profession."

The original Der Tatortreiniger was written by Mizzi Meyer and ran for 31 episodes over seven series, from 2011 to 2018. 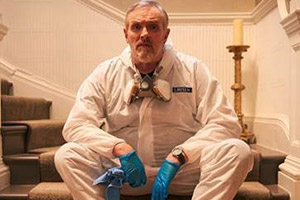