Channel 4 is to broadcast Black, British And Funny, a documentary looking at the black comedy circuit's history.

Mo Gilligan, who hosts The Lateish Show With Mo Gilligan and co-hosts The Big Narstie Show on the channel already, will present the hour-long programme, which has been commissioned to tie in with Black History Month in October.

Channel 4 says: "Mo Gilligan wants to celebrate the Black comedians who paved the way for artists like him and shine a light on the new wave of acts coming."

The synopsis for the programme explains: "Mo Gilligan's first big break came from the Black British comedy circuit; a thriving yet little known about stand up scene which has been packing out theatres up and down the country for the last 30 years, with its stars selling out major venues like The O2 and Hackney Empire. Now Mo wants to celebrate the icons who paved the way for artists like him and shine a light on the new wave of acts coming through. He'll look back at the history of the Black comedy circuit, asking why this scene has remained hidden in plain sight and, importantly, question why he is one of the few comedians from the scene who have crossed over and 'made it', enjoying mainstream success.

"In this documentary Mo will embark on a personal, celebratory and sometimes bittersweet journey of discovery, exploring his own background and delving into the Black comedy circuit. Mo will meet icons from the late eighties. He will spend time with some of the most famous people you have never heard of. Super stars on the scene like Slim who Mo first encountered when he was making his own tentative steps into stand-up and who ultimately inspired him to become a comedian. Mo will question what happened in the Noughties, which saw a period in the wilderness for Black British comedy in the mainstream. Mo will also meet the new rebellious breed of comedians who are not waiting to get a seat at the television table but rather building their own on social media.

"So, do the general public just not find Black British comedians funny? Why are hardly any fronting their own TV shows or appearing regularly on panel shows? The film will explore if there is a systemic racism that blocks the opportunities of Black comedians from entering a highly competitive industry."

Gilligan, who won the entertainment performance prize at last month's BAFTA Awards, will also act as executive producer on the project, which is being made by Rumpus Media and his own production company, Momo G.

He says: "My first big break came from the Black British comedy circuit. It's an incredible scene packed full of outstanding artists. I am so proud and truly honoured to give it the attention it deserves through our film with Channel 4."

Fozia Khan from Channel 4 adds: "We are over the moon to be working with Mo in documentaries to bring this personal and important film to our audience."

Director Vanessa Van-Yeboah comments: "Growing up, I attended black comedy shows on the circuit and always wondered why more of the comedians weren't represented on mainstream TV. It's an honour to be working on this film with Mo and pay homage to this rich and vibrant scene that has thrived for many years producing and nurturing amazingly talented comedians, writers and actors."

The documentary is one of five programmes Channel 4 has commissioned for broadcast in October. The other shows are Black Love, Black Hair, Is Covid Racist? and Are Women The Fitter Sex?.

Danny Horan from Channel 4 says: "I am really excited about the range of programming for Black History Month this year, particularly because we are launching new onscreen talent we hope will become regular faces on Channel 4. This is an important time to reflect, celebrate and consider again what has been achieved and how much more we, as a society and an industry, have to do to redress the balance of storytelling, subjects and talent, both on and off screen."

Black, British And Funny will be on Channel 4 in October.

This story was updated on 25th August with additional information and quotes. 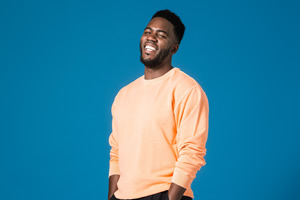