The recommission of the topical BBC Two show, in which Boyle and his guests discuss current events, comes as the channel prepares to air a stand-up special from the Glaswegian comic, Excited For You To See And Hate This.

New World Order returned for a one-off, end-of-year round-up of 2019 in December. Further episodes now seem imminent after Boyle took to Instagram to post a mock-up of the show's new set, reconfigured to seat his guests around a socially-distanced table.

The bearded model in his chairperson's seat "captured me quite well" he argued. Regular guests Sara Pascoe and Mona Chalabi also commented on the models, with the former remarking that he was "very mature not to just zoom in on the booby one".

Boyle's fronting of New World Order is nominated for best entertainment performance at the BAFTAs, and is up against Mo Gilligan, Lee Mack and Graham Norton, with the awards ceremony due to take place remotely on Friday 31st July.

A BBC spokesperson told British Comedy Guide that they were unable to confirm when New World Order would be returning.

Meanwhile, Excited For You To See And Hate This airs on Thursday 23rd July. Recorded at Glasgow's King's Theatre on the final date of Boyle's Frankie Boyle: Full Power tour last year, he describes it as "a wee meditation on what jokes you should and shouldny do".

Frankie Boyle: Full Power transplanted material from Series 3 of New World Order written by Boyle and his programme associates. The televised 45-minute set will focus on the nature of comedy and controversy, British politics and Glasgow's relationship with swearing and vitamins, while discussing his concerns about ageing, sex and buying a dog.

The comic's documentary series, Frankie Boyle's Tour Of Scotland, is currently being repeated on the BBC Scotland channel and is available on iPlayer. 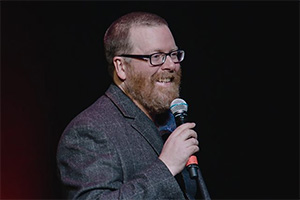 Frankie Boyle Live: Excited For You To See And Hate This