Directed by Uncle creator Lilah Vandenburgh, Heart To Heart stars Fern Deacon as a patient waking from heart surgery who hears a voice telling her she risks dying a virgin.

This turns out to be her heart, 'Lump' (Tennant), who's scheming to help her get together with hot nurse Kim (Siena Kelly) and live a little.

The 10-minute pilot about romance, sexual awakening and coming-of-age is one of a projected 10, with the first two episodes commissioned by Sky Studios.

Written by IR Bell-Webb and co-starring Felicity Montagu (I'm Alan Partridge) and Jo Martin (Fleabag), Heart To Heart was due to premiere at the 2020 SXSW Film Festival and the BFI Flare Festival. Instead it took its bow virtually at OUTFest and is currently available to watch at Series Fest until 24th June.

Produced by Chiara Ventura and Manon Ardisson (God's Own Country), the creators are now seeking a broadcaster to commission a full series.

Tennant is one of "very few big name male actors who I would trust with providing the inner monologue of a young lesbian" Bell-Webb told the Solzy At The Movies website.

"Lump says such gross things and there's a version of that that's just offensive, you know? Whoever's voicing him, should be hilarious but not predatory, and that required an actor who didn't have the gross funk of toxic masculinity rolling off him.

"David Tennant was pretty much the only 'name' who came to mind who I felt confident was the right fit: smart, funny and sensitive ... And then I had to text my friends crying about how I was going to have to explain what a fursona was to David Tennant.

"He was such a class act, bless him. I'm Scottish and always intended for Lump to sound Glaswegian - in part as a tribute to a Glaswegian friend of mine, a cardiology nurse whose stories really helped me during development - and I think David was just pleased to be asked to be Scottish for once!"

Vandenburgh promises: "More romance. More buddy comedy. All the feels. Some big twists. A lot of laughs. And maybe an appearance by Lump... in the flesh...."

"Sky commissioned the two episode pilot, but we need a distributor/broadcaster to commission a full series. If fans like it and want to see more episodes, please tell your friends, recommend it, and make noise on social media." 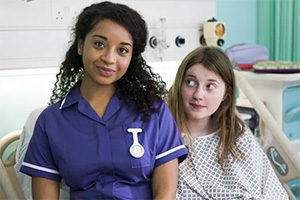