BBC Two is to broadcast a new short-form series in which comics are tasked with entertaining the nation from their homes, during the coronavirus lockdown.

Six 15-minute episodes of Comedians Playing With Themselves will be filmed.

Programme makers say they'll be "tasked with entertaining and enlightening the nation in their own unique way".

The producers add: "From coping with stroppy teenagers, to isolating as a couple and avoiding arguments, from finding new sports to play and perfecting a hit podcast, no topic will be off limits. Each of the comics will shelf shoot their comedy nuggets helping us all to get through isolation together and having the maximum amount of fun indoors."

A broadcast date for Comedians Playing With Themselves will be announced soon. The six episodes will also be rebroadcast as three 30-minute compilations at a later date.

The commission is part of BBC Two's drive to broadcast more new comedy. Beginning in May, Thursday nights on BBC Two will feature The First Team, the football sitcom written by the creators of The Inbetweeners, and a new series of QI.

The channel has also announced today a full series of Alma's Not Normal, a one-off special from Charlie Brooker and a new series starring Matt Berry. 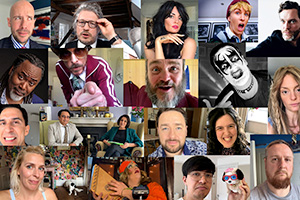