The cast has been revealed for Sara Pascoe's new sitcom.

Six episodes of Out Of Her Mind have been filmed, to be aired on BBC Two.

Written by and starring Pascoe, the series "explores heartbreak, family and how to survive them".

Blurb explains: "Sara Pascoe doesn't know why everyone else in the world is pairing up and having babies and sets out on a mission to understand them. She tries to prove that romantic love is mere chemicals and conditioning and doesn't deserve our respect. This conflicts a little with preparations for her sister's wedding, and her best friend's first pregnancy."

The episodes were filmed at Ealing Studios across the last few months, produced by Catherine Gosling Fuller and directed by the Blaine Brothers. The directors previously worked with Pascoe to make her 2018 comedy short Sara Pascoe Vs Monogamy.

Sara Pascoe says: "Out Of Her Mind is a direct expression of my mind. We've turned my brain into a theme-park, and everyone's invited! The cast are INCREDIBLE and I can't wait for people to see what we've made."

Out Of Her Mind will be shown on BBC Two later this year. 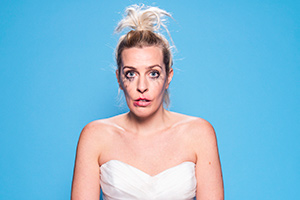 Out Of Her Mind