Sky One has ordered a second series of its new sitcom Intelligence, as the first series prepares to air.

The show, which stars Nick Mohammed and David Schwimmer will return in 2021.

Intelligence is described as "a workplace comedy set in the UK's GCHQ - a kind of weedier, geekier version of MI5, where they tackle international and domestic cyber-crime from a desktop".

The comedy is set in the UK's high-tech surveillance agency, following a lowly employee and an incoming agent on secondment from the US's equivalent, the National Security Agency.

Creator, writer and star Nick Mohammed comments: "I couldn't be more delighted about setting off alarm bells inside GCHQ all over again."

Friends star David Schwimmer, who will return as NSA agent Jerry Bernstein, adds: "I am thrilled to continue to pretend to be important to National Security."

Below is a clip from Series 1: 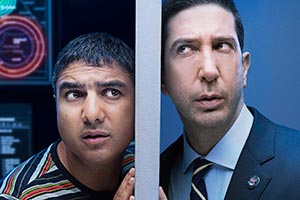