Sky has ordered a series called Redknapps' Weekend Warm Up.

The football-based entertainment show will be fronted by Jamie Redknapp, Harry Redknapp and Tom Davis.

"The manager, Harry; the player, Jamie; and the fan, Tom; are inviting the biggest and best names in show business and sport to join them, and a lively audience, for an evening packed full of laughter, topical football talk, celebrity chat, and thoroughly entertaining VTs - as well as Harry's unique anecdotes."

Jamie Redknapp says: "When the opportunity came along to work with two of my favourite people I couldn't refuse. Big T is one of my favourite comedians and of course my Dad knows how to crack a joke too. I'm looking forward to getting started and letting you all have a laugh along with us."

Harry Redknapp comments: "When Jamie asked me to join him on his new chat show, I jumped at the chance. I've been watching my son's work in A League Of Their Own and as a pundit on Sky Sports for a long time and wanted to work with him, along with Tom Davis."

Tom Davis adds: "Who wouldn't want to be involved in a show featuring two football legends? Until that day comes I'm chuffed to be working with Harry and Jamie on their Weekend Warm Up. The boys are always a laugh and it's going to be a lot of fun."

A non-broadcast pilot of the show was shot in October. The six hour-long episodes of Redknapps' Weekend Warm Up will be filmed and broadcast on Sky One later in 2020. 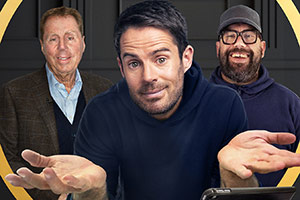