Comedy drama There She Goes is to return for a second series.

The Merman production follows a married couple - played by David Tennant and Jessica Hynes - who are struggling to raise a daughter with extreme learning disabilities.

Written by Shaun Pye and his wife Sarah Crawford, the comedy is based on their own experience as parents of a child with an as-yet undiagnosed chromosonal disorder, Hynes was recently awarded a BAFTA for her role in the series, Best Female Performance in a Comedy Programme.

Debuting on BBC Four in 2018 to critical acclaim, Series 2 will see the comedy drama move to BBC Two.

The young Rosie will again be played by Miley Locke, her elder brother Ben by Edan Hayhurst, and their parents Simon and Emily by Tennant and Hynes.

Whilst Series 1 focused on the family whilst Rosie is 9 - with flashbacks contrasting their struggle at 18 months - Series 2 will see her aged 11, with flashbacks to age 3.

The new series, of five episodes, will be co-produced and internationally distributed by the BBC and ITV's premium streaming service BritBox, which is due to launch in the UK later this year.

Shane Allen, Controller Comedy Commissioning, says: "Series 1 pushed at the boundaries of what television comedy can explore and achieve. Its unsentimental approach was shot through with love and humour to create something very unique and poignant. We experienced a tidal wave reaction of people who were moved and won over by it; the themes and stories of series two are richer still."

Clelia Mountford, Co-Founder, Merman, says: "We're so excited at Merman to be able to continue on Rosie's journey alongside the Pye family and to tell even more of their amazing story. The nation fell in love with Rosie as much as we did, and we couldn't be happier to be a part of that."

Shaun Pye, writer and creator, says: "The massively positive response to the first series from parents and siblings of children similar to Rosie showed us that while our daughter is one in a trillion, we're part of something much bigger. Sarah and I feel very proud to be able to tell more of our daughter's story... or to put it more accurately, write down all the loveable, infuriating, beautiful, crazy stuff she does."

At the time of writing, the complete first series is available to watch on iPlayer. 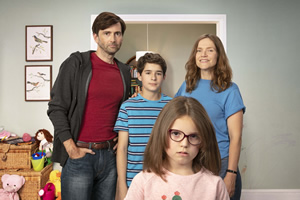