Channel 4 has confirmed the commission of a new three-part series from Tez Ilyas.

The stand-up comedian will front new topical satire The Tez O'Clock Show, weekly from the end of this month.

To be filmed in front of a studio audience in Manchester, the show will mix comedians and celebrity guests, sketches and studio antics, "including provocative monologues and interviews".

Channel 4 says: "One of the most exciting break out stars in British comedy, Tez Ilyas joins Channel 4 this summer with The Tez O'Clock Show, a late-night satirical comedy show... that is TRULY anti-establishment - it's hosted by a northern working-class British-Asian-Muslim."

Producers Expectation explain: "This hilarious and subversive show will blow the cobwebs off TV satire and prove once and for all that it's possible to joke about anyone and anything without getting cancelled.

"Crashing into the studio show will be parodies, sketches and news bulletins from the Pakistani Broadcasting Corporation (PBC), starring Man Like Mobeen's Guz Khan and comedian Sindhu Vee, which will provide a satirical take on the news and show Britain (and the West) in a very different light.

"Tez will also take part in a briefing room - just like the ones that happened when he worked at the Home Office - on the hot topics of the day. Here he'll be briefed by his fellow fast-rising comics and Uncivil Servants, Sophie Willan and Adam Rowe, who will each try to sway him to their way of thinking.

"He'll then be joined by co-anchor Vee in the on-set shisha café, where they'll be joined by funny, opinionated, big name guests."

Expectation is making the series alongside Ilyas's own company, Pious Productions.

"Thank you Channel 4 for this massive opportunity to follow in the footsteps of giants. Mama! We did it mama!

"I'm can't wait for everyone to see it.. I hope y'all are ready for my silly, smart and subversive take on the world *raising hands emoji*

"Seriously though... you don't understand! This is the show I've always dreamed of doing (after Blue Peter obvs)."

Ben Wicks, Creative Director of Comedy and Entertainment at Expectation says: "Tez Ilyas is an extremely smart, wonderfully playful satirical comic and we should all be hugely grateful C4 have given him a series. Had they not he might have returned to his old job at the Home Office where - given the strength of his jokes - he'd have done untold damage. He is flanked by the ludicrously talented Guz Khan, Sindhu Vee, Sophie Willan and Adam Rowe. They are collectively wrestling satire from rich white people in a show that oscillates from sharp to silly in a fast-paced comedic blitz."

Karen Murdoch, Commissioning Editor of Entertainment, Channel 4, said: "Tez Ilyas is an incredibly exciting talent, and we are thrilled to have him on Channel 4. With all the political shenanigans going on in the UK and the world in general, it feels particularly timely to be launching a brand new satire show, hosted by such a smart and fresh new voice." 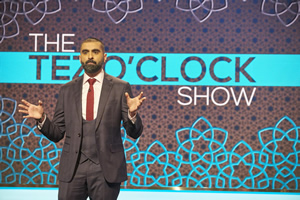